The title says it all: these games were epic!  We decided to swap me into the bottom lane and let Iggie play mid and Choppes play top after we saw that they banned out one of our strategies.  We were actually fine with this.  We moved directly into a poke comp.

We didn’t jump out to a huge lead, but we knew how to build it gradually.  We won every lane except for bottom lane, then transitioned into a team stage and started dealing damage to turrets.  While the enemy team was avoiding poke from Jayce, Lux, and Morgana, Kog was having a grand time just poking the turret.

Our team excelled in team fights.  We could siege, disengage, pounce, do everything we needed to win.  It was really Iggie’s time to shine.  He had multiple kills where he would snag someone out with a snare and just vaporize them from the map with an intense laser!

The casters were really confused at my purchase of my second Cloak of Agility after I already had my Infinity Edge.  However, I was deciding whether to get Phantom Dancer of Statikk Shiv, and decided I wanted the extra poke so I went with the shiv.  However, the extra crit turned out to be super useful as I already had good attack speed, armor pen, and damage.  It just took me all game to finally catch up with Cait in farm! 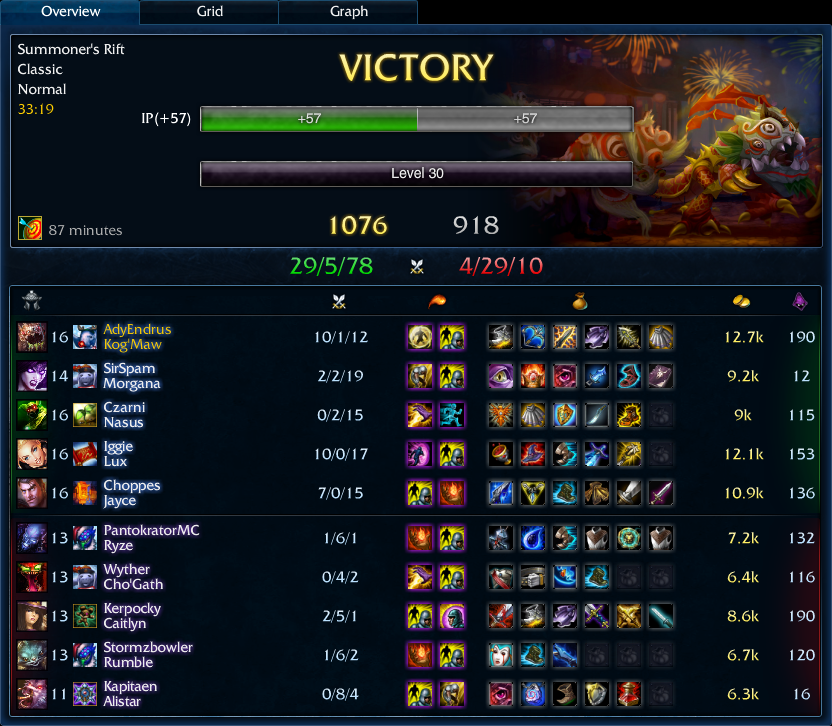 Game two was even closer than the first, but not by much.

We had a Shen pick because Lux had to be banned.  We were surprised to see them recreate the bot lane from the game before.  Granted, we definitely didn’t win in the laning phase, but that Kog’Maw isn’t the nicest person in the late game.  In this second game it was even worse.  Caitlyn tried to ult me, so I ran over to where Dan was standing.  He ran towards me.  After he was shielding my body from the Caitlyn ultimate he stepped out of the way, which resulted in my death. I was so furious that I had to mute my microphone.  At that point Jack said “hey, are you going to lose?  Then quit whining.”

I hate playing from behind, but I knew that if we grouped we would win.  We grouped mid.  I had a BF Sword and Zeal, but Caitlyn was sitting on Bloodthirster and Zeal.  She was getting stacks for her CS, but I was just getting gold.  However, once I finished Infinity Edge the game was over.  I was hitting twice as hard as Caitlyn was.  I got back to mid lane just as the enemy team was sieging our middle turret.  Between Jarvan and myself we managed to kill two people in a 2v5.  We immediately started forcing objectives.

I did have one more near death experience.  I saw the enemy team rushing Baron, so I stepped into mid lane and watched them all turn to come for me.  Ryze grabbed me with his Rune Prison, and Alistar and Rumble started to chase me.  I used Barrier when I traded with Ryze, but then Flashed to get outside of his range.  The Caitlyn ultimate took me to less than 60 life.  Rumble dropped his ultimate, but aimed it the wrong direction, which left me alive to recall in a bush.  I went back to base and then rushed Baron to stop Epic from picking it up.

Again, we were able to siege down mid and force kills.  We got lucky a few times when WuKong went to engage on us and his team didn’t follow him.  The amount of crowd control he brings to a team fight can really be devastating.

Epic’s top laner complimented Choppes after this game.  He said that they thought if they took Jayce away then Choppes might have a harder time in top, but he knew exactly how to handle Jayce.  Choppes won his lane so handily that he could have an impact on other parts of the map afterwards.

The casters called out Iggie and said that banning his Lux was probably a good idea, because he was 1-1-1, and the game wasn’t going as smoothly.  The instant they said that, Iggie picked up three kills.  He then spiraled until he was Legendary and destroying Epic’s Nexus.

Czarni had another deathless game (0-0-13, he’s going to be hard to replace), and Dan did a phenomenal job keeping me alive and catching multiple members of the enemy team in his ultimate.

Overall we had a strong team comp and excellent execution in team fights.  Good games, Epic! 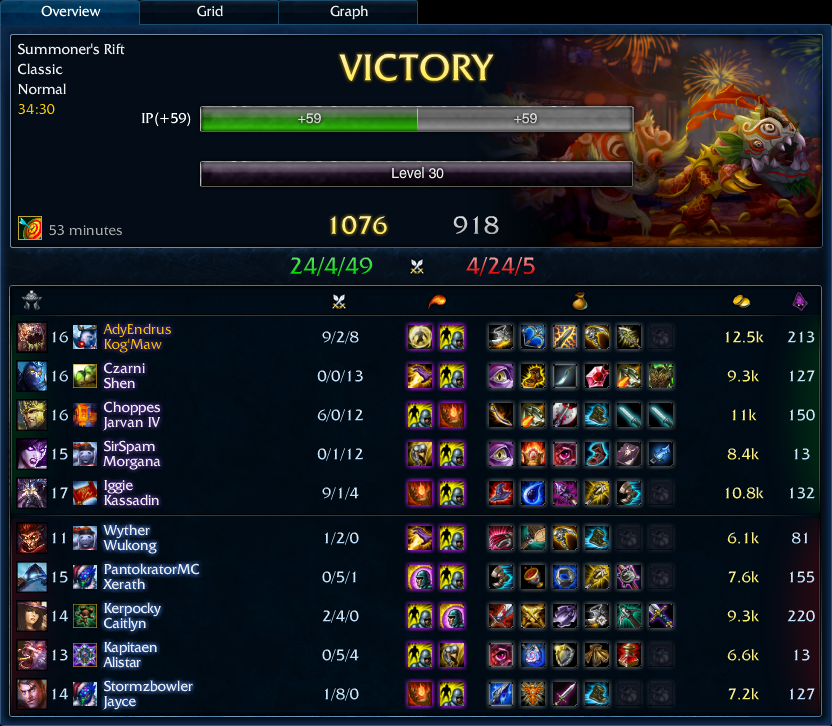 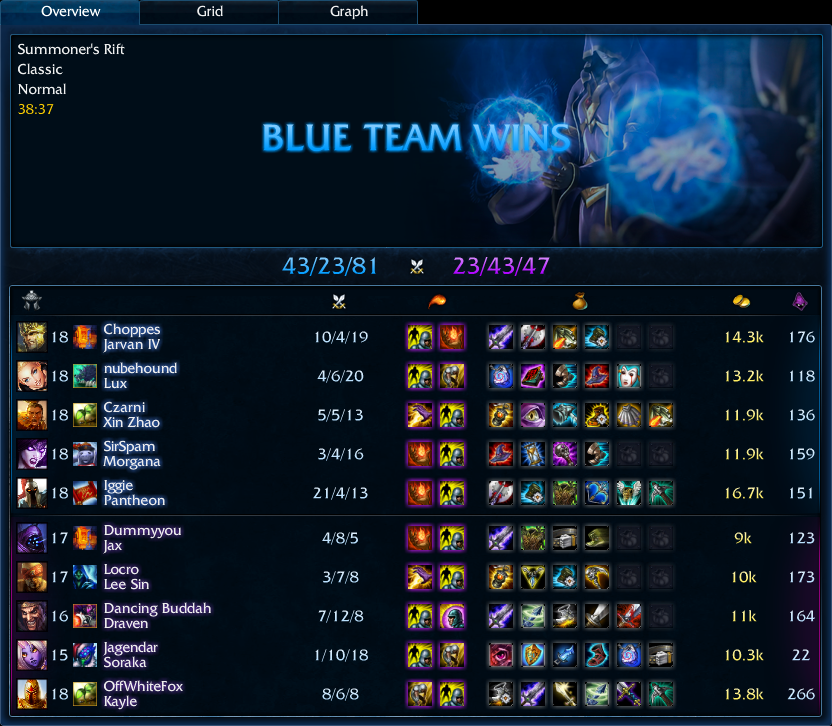