I really don’t know if this game should count against my record.  I really didn’t want to play any more League of Legends tonight.  I had just gotten a Pentakill in the game before, and was really only playing to humor my friends.  So I picked LeBlanc.

Well, this game went poorly.  The other team had a strong start as they jumped out to a 2-7 lead against us.  I had the two.  Sadly, I had traded kill for kill with Twisted Fate.  Luckily, I get to mid-game a lot faster than TF does.  His potential late-game can have a huge impact on the game, but he has to make it there.

After we traded kills the second time I bought my Soul Stealer.  Better to start early, right?  I raced straight to 20 stacks, not missing a beat.  I snowballed mid lane so hard that I had the game tied at nine by the time I had eight kills.  I was matching the enemy jungler, top, mid, and bot by myself.  The request I kept hearing from my team mates was “Don’t kill them so quickly so we get assist credit.”  I’ll see what I can do (while vigorously shaking my head).

The enemy team was very willing to pressure when I was dead.  I specifically remember pressuring their top lane’s inhibitor turret.  Dan had cleverly pulled Garen over the wall.  I helped to make him go away.  However, the enemy Blitz pulled this same witchcraft on Dan, and Dan went bye bye.  We started to retreat with Blitzcrank leading the charge.  Steve asked me, “Can you strafe his hook?”  At that moment I turned around and started walking towards Blitz.  He turned and ran.  Steve just started laughing out loud.  I was such a threat.  There wasn’t a target on the enemy team that I couldn’t kill.  I proved that to myself later.

Our mid inhibitor was down and I had been killed.  The enemy team went for Baron and my team had no way of contesting it.  That’s fine, they were smart to defend the base anyway.  However, when I spawned I ran for Baron.  I caught Garen outside the basin and killed him quickly, only to reveal Twisted Fate in the back of the Baron pit.  He had cancelled his recall and was sitting on a blue card.  If you think a blue card is going to save you from me you have something coming.  I step towards him and he flashes over the wall.  So be it.  I walk around Baron pit and find TF recalling just on the back side.  I blink into range and land a Q and E combo to silence him.  I know his Flash is down, so I save mine.  Just as my E triggers for the second time I see a Mystic Shot shoot into the bush by the Lizard Elder, which I’m conveniently standing right next to.  Zing, zing, zing, POP!  Ezreal’s dead.  Kha’Zix is coming for blood.  I’m on cooldown.  I walk to tri-bush above Baron.  I see Kha’Zix pop his ult so I can’t see him coming.  I know I’ll be dead before I can cast.  I walk up and right to the bush by double golems.  Kha’Zix face-checks.  In the words of Voyboy, “See ya!”  Boom, four people on the enemy team just lost Baron buff to a solo LeBlanc.

Then they all bought Banshee’s Veil and moved as a group.  When my team had 28 kills I had 23 of them.  However, I only finished 24 of 31.  I hit 20 stacks multiple times in that game.  It was a lot of fun, but still a 44 minute loss.  Better luck next time!  Maybe then I’ll be down from Cloud Nine. 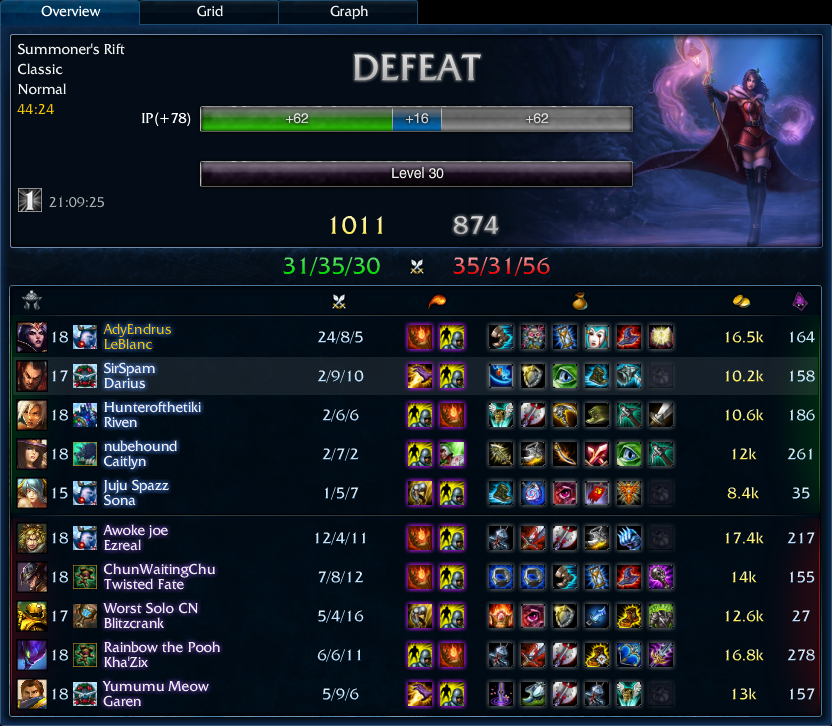 Yay! Frank is back in action!