Kat is highly mobile, manaless, and is a generally strong laner.  This was a blind pick game that I went in solo queue, so no bonus jungle pressure or help from people that I know.  Kat showed up in lane after we traded for first blood with a Negatron Cloak.  I felt this was EXTREMELY rude, so I took out my frustration on her.  I was surprised at how effective their Nidalee and Jayce bot lane was.  Managed to hold our bot lane to a combined 1/5, and Riven was having her way with top, putting him at a lowly 2/4.

It has been a good amount of time since I played LeBlanc, but it turns out I can still do it.

This wasn’t really a fair match-up, and probably one you won’t see very often.  I played versus an AP Tristana.  With the Nunu pick I thought for sure we would see an AP Ezreal, but such wasn’t the case.  Tristana’s burst comes from being able to jump in (W), hit me with her DOT (E), and then blow me away (R).  If some extra damage is needed, use ignite.  However, LeBlanc silences when she trades.  She also disappears when dropped below 40% health.  So instead of running, if I just fight I would win.  I actually go caught at one point in the jungle, Trist DFG’d mid-air and cut me down to less than 1/5.  I promptly stealthed, and pressed QRW and watched her melt. 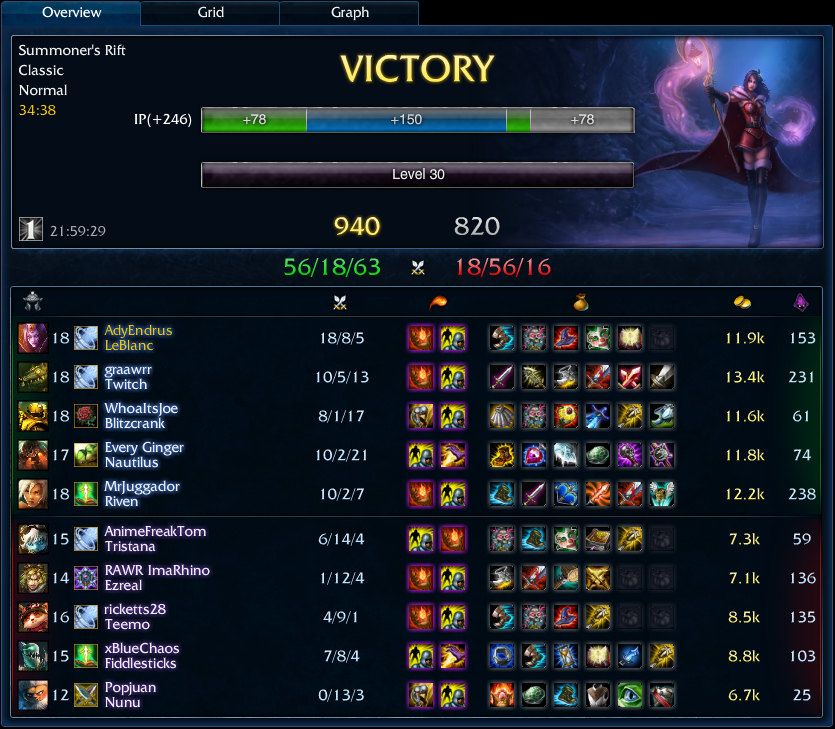 The team still wouldn’t surrender until I bought a Soul Stealer just so I could pass Fiddle’s four stacks.  I didn’t notice that they had a 1-25 bot lane.  Even though my score isn’t anything spectacular I did have about 12 of our first 20 kills to really get the ball moving.

Just two short games later Joe and Ginger tempted me to try starting Soul Stealer and see what happens.  I have always been scared to start that item because if you don’t perform then you just look bad.  I hate seeing Lux finish 0-6-2 with a Soul Stealer.  I didn’t want to be that Lux.

This was by far the luckiest lane opponent I had ever played against.  Twice I had him dead with my ignite ticking on him.  Both times his jungle Yi showed up and Viktor went up a level before my ignite could finish him off.  Once, that’s lucky.  Twice in one game?!  That’s the luckiest.  I went Kage’s first, then got Soul Stealer.  I only made it to about 11 stacks before the other team gave up the ghost.  Two players without Flash really lets LeBlanc do what she pleases.  It was my first time playing versus a Viktor in mid lane as well.  I hate the laser bug! 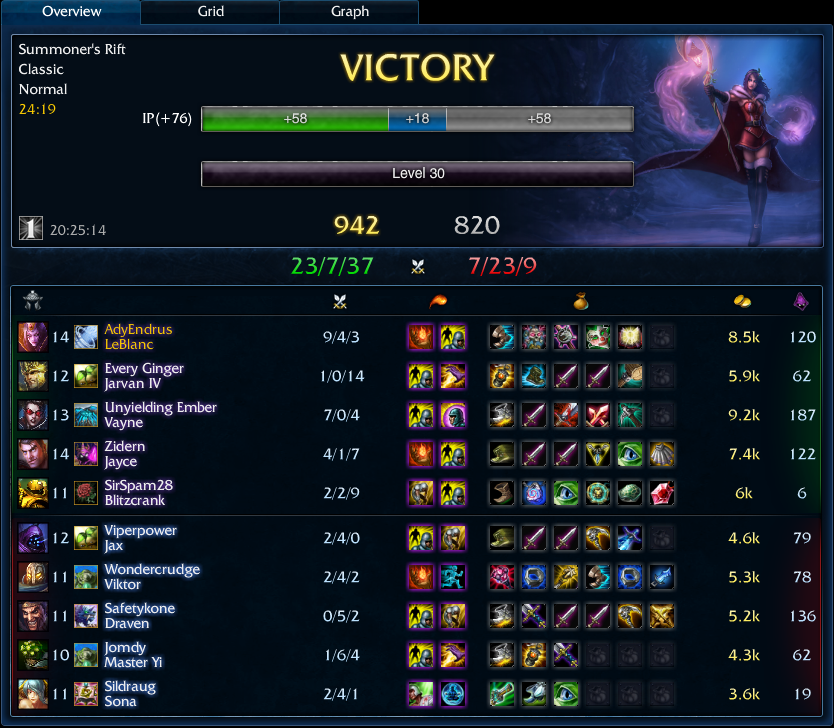