Just like millions of other gamers out there I have been working on my placement matches for Season Three.  This stage of the game never feels easy.  I always dread losing, but when a loss has such a large impact on where you are placed it can really mean the difference between Gold, Silver, and Bronze.

On the flip side, wins bring so much more satisfaction; it is such a sigh of relief when the win has been secured, the enemy team has lost, you are riding on to the Victory screen!  It’s those moments that we all wait for.

In one of our games we actually had someone request to play as a jungler.  When they saw me pick Twisted Fate they pounced on Nocturne.  This got me really excited because I figured it would be awesome to coordinate global ultimate ganks with Nocturne!  I would only use my ultimate after Nocturne used his and I would get to show up right with him anywhere on the map!  However, this Nocturne would rather be a hero and fight 1v4 than go with the team and pick off the straggling fifth player.  Sigh.  We still managed to win.

I’m going to include screenshots of all my placement matches so you can see how my wins and losses went.  Some were sad.  Some were happy.  I’ll let your imagination decide which was which!

I did notice that my fourth game is missing.  I played LeBlanc and dominated a Twisted Fate mid and a Xin jungler.  I was the only one on my team with kills at the 10 minute mark.  Nidalee lost to Singed top.  Corki and Lulu lost to Miss Fortune and Sona in bot lane.  It was a pathetic show from my team mates.  I couldn’t believe that I went positive in such a bad game, but someone on my team had to!  Other than that one game that is missing all the others are accounted for.  This blog has really kept me accountable.  I guess that could help explain my ranked KDA of 10.1/5.5/8.5 over 30 games, 18 wins, 12 losses.  Our ranked team is currently 11-8, and I’m currently 7-4 in solo queue. 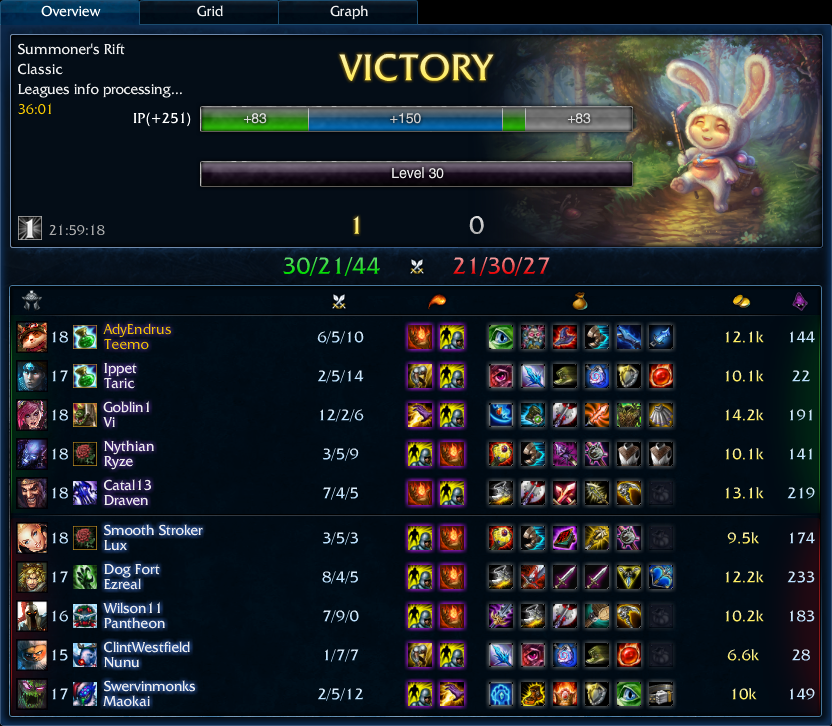 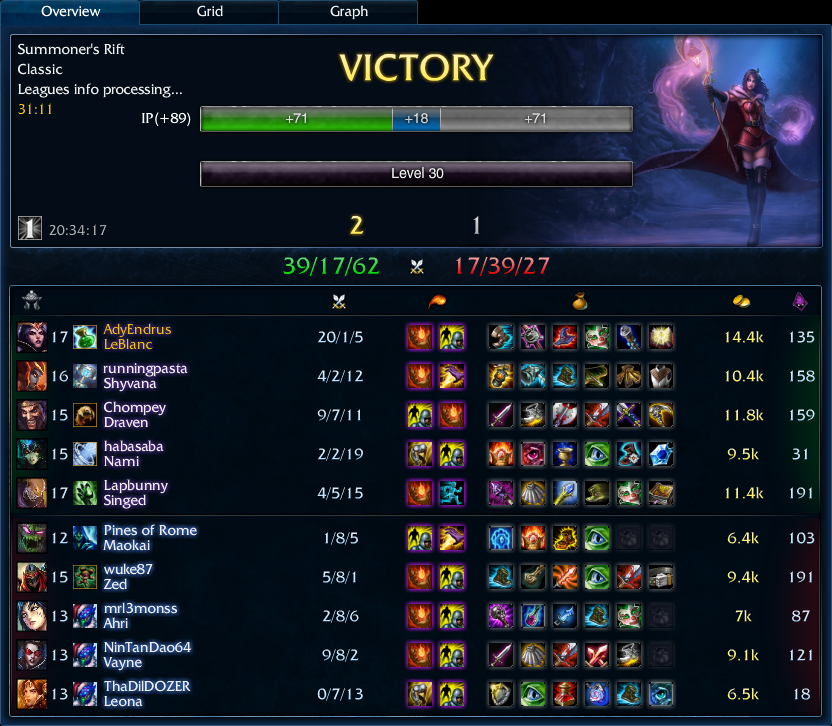 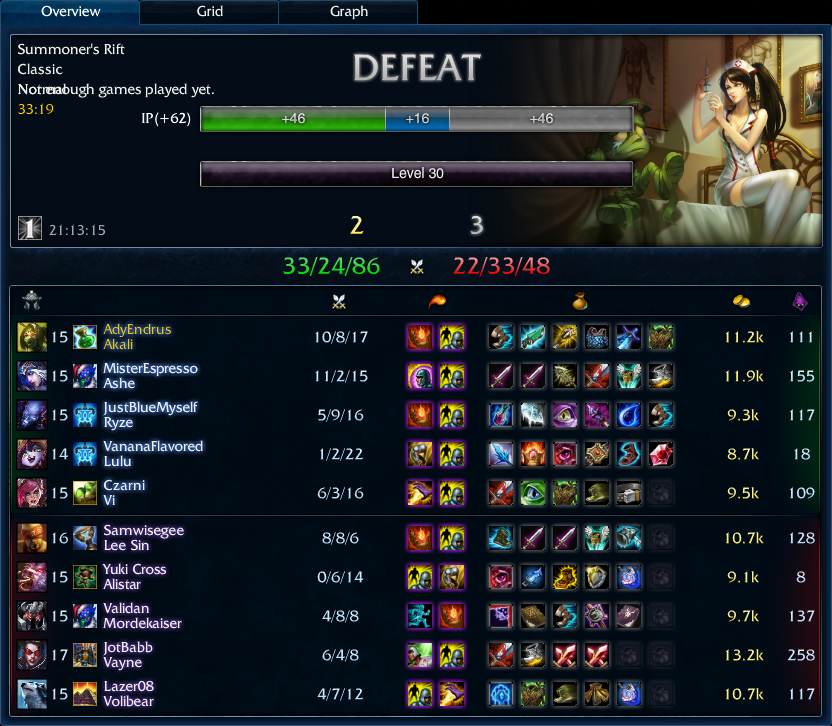 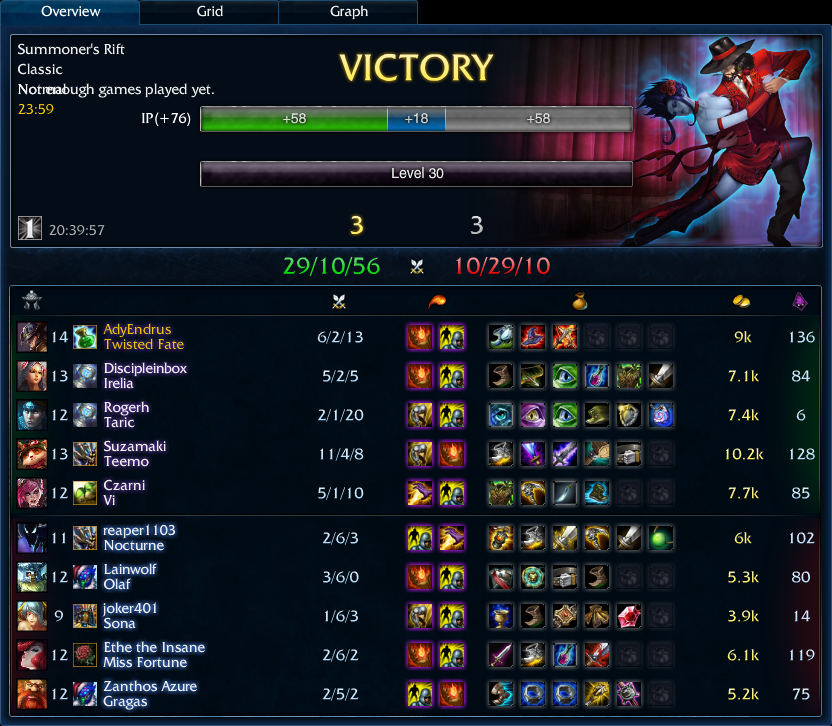 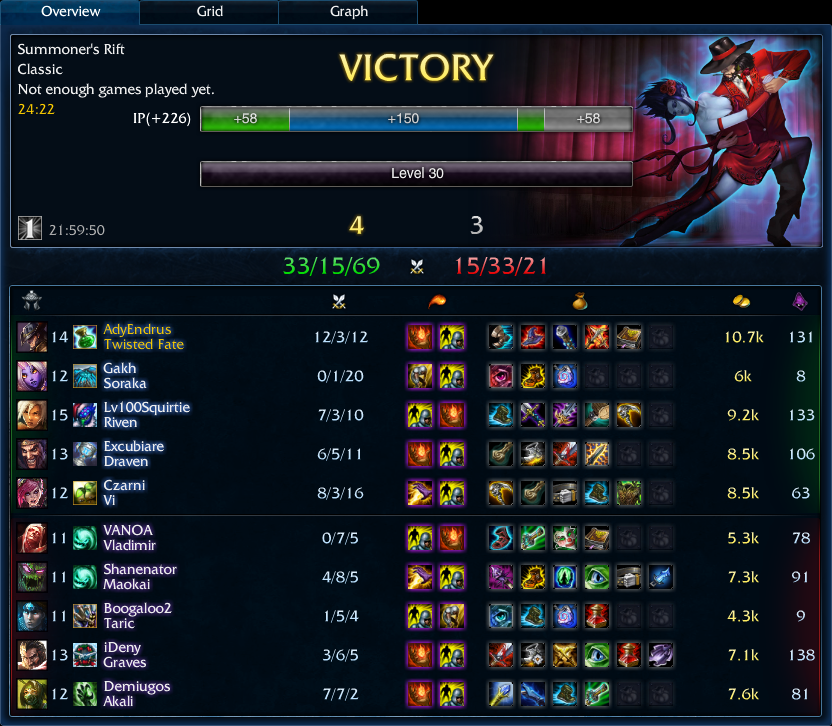 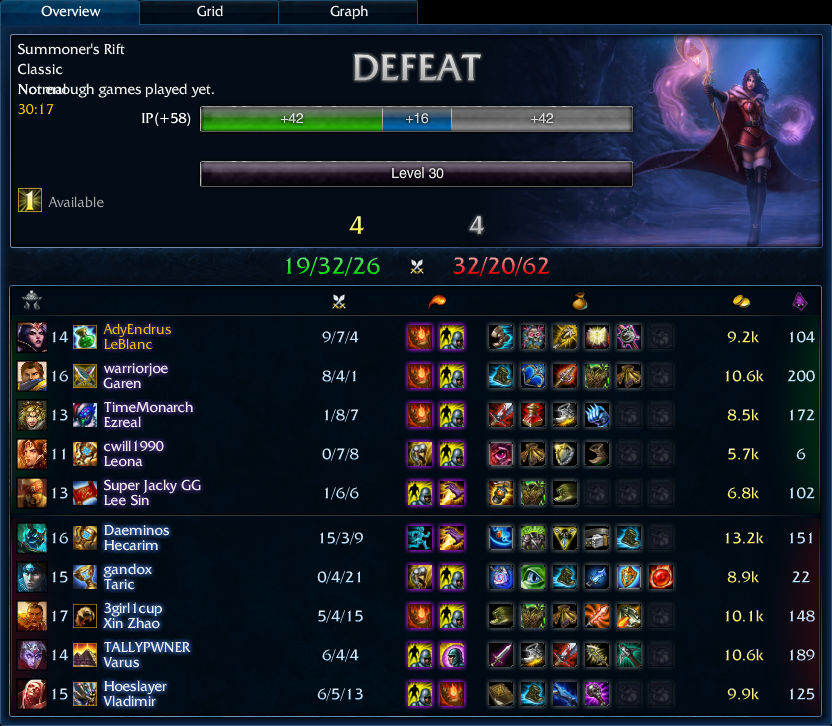 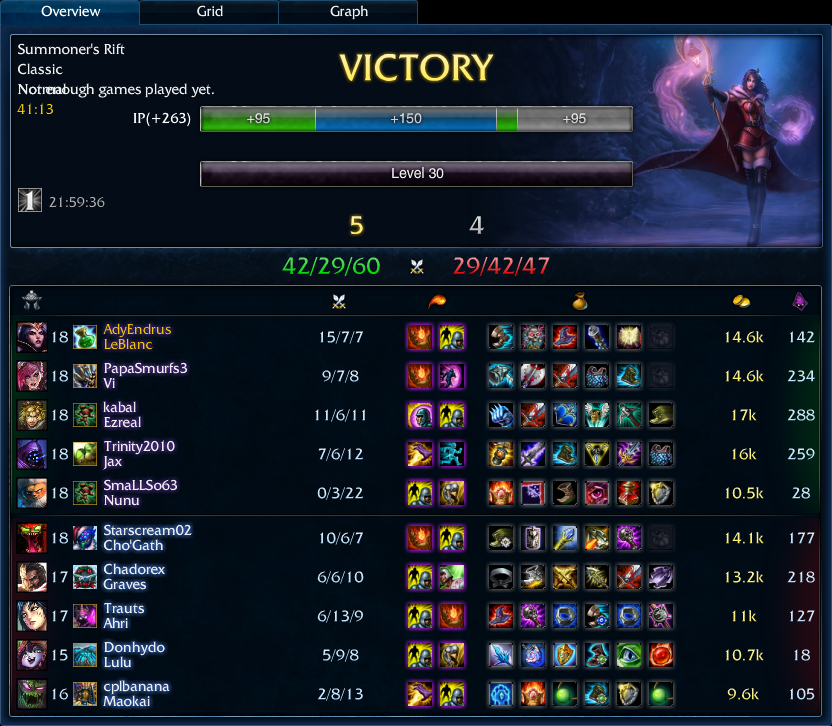 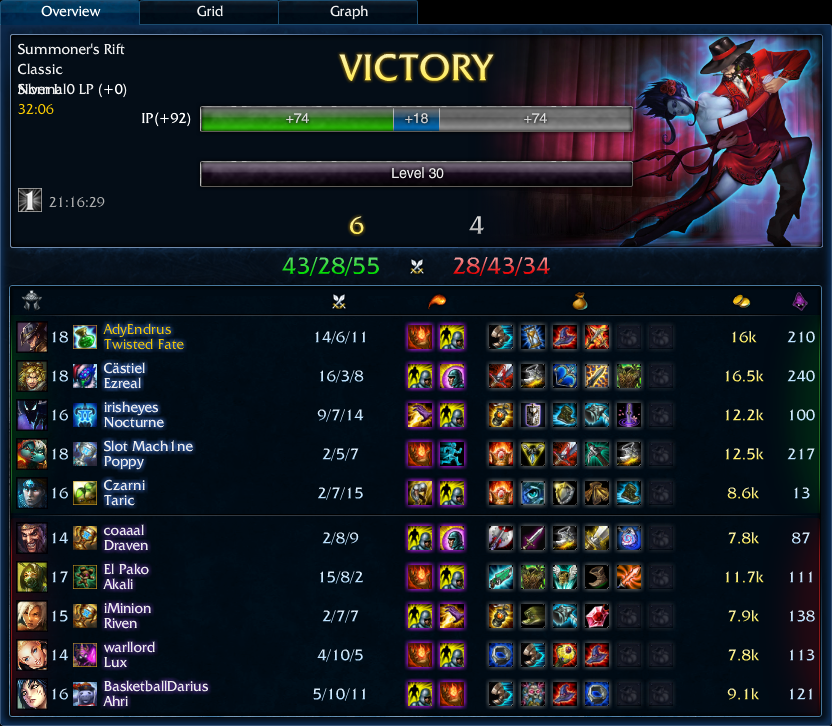 The enemy team’s best player was Janna.  She made so many plays this game!  This is pretty obvious considering the enemy Ezreal was negative, but our bot lane was negative as well.

This game was so close despite the enemy team not having their solo top player.  Renekton must have felt like a total idiot after showing up to lane against Irelia with nothing but a Doran’s Blade.  He got wrecked, then raged.  I picked up a triple kill at the end of this game just before they could pass a surrender vote.

Akali has been a lot of fun recently, but I’m not sure I’m comfortable enough with her yet, but we’ll see. 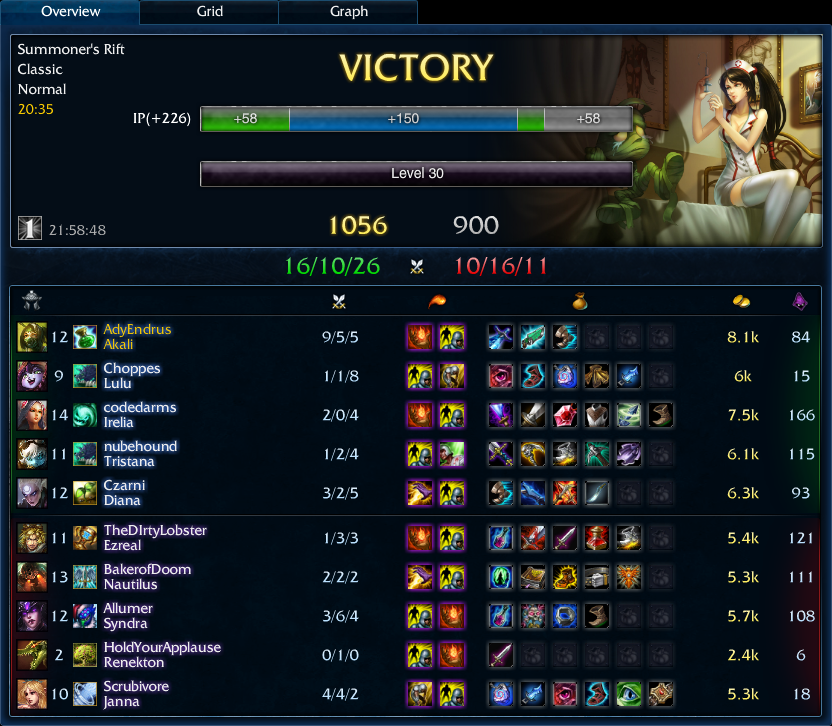 We knew this day would come.  In our Ranked Fives matches the enemy team picked LeBlanc.  Iggie was immediately upset because he was supposed to be going mid, but nubehound was trading a champion to him, so Iggie would have to pick from nubehound’s champion pool to face LeBlanc in mid lane.  The enemy team had picked Garen to try to stop me top, so I offered to go mid against LeBlanc.

LeBlanc has boundless potential because of the varying abilities in her kit.  She brings good crowd control and amazing mobility to a team.  As Akali I was worried that she would be able to burst through my health pool and then trap me to prevent me from dashing and getting away.  I knew the early laning phase would be the worst part of the game, but I could play back and just wait for the mid game when I can really shine.  I just couldn’t let LeBlanc get early kills on me.

At level one I had my Mark of the Assassin and LeBlanc had her Sigil of Silence.  We traded those one for one.  I went to step back but saw LeBlanc running away.  I immediately knew that she didn’t want to trade with me so I stayed up as close the creeps as possible.

I recently made a rune page and a mastery page specifically for Akali.  I had copied them from Crs Voyboy who designed them to give him both of his passives at level one.  I used to question why he needed both, but I felt the benefit from it immediately in that lane against LeBlanc.  I had sustain in lane, and LeBlanc did not.  After we would trade I could use Crescent Slash once in the middle of the creep wave and heal to almost full.

I beat LeBlanc to level six, which is a big part of laning against her.  If she can beat you to level six then she has the potential in her base damages to kill you from full.  I waited for my ult to get an extra stack, then baited out LeBlanc’s Ethereal Chains.  If she landed a chain on me I wouldn’t be able to sustain damage on her and could potentially get trapped under her turret.  Those easily make the list of things I don’t want to have happen.

My moment of opportunity finally came.  LeBlanc hit a creep with her chain and I went berserk on her.  Even with her trying to blink away I stuck with her and finished her off.  I escaped out from under her tower with about 300 life left, most of it from spell vamp.  However, I was not alone.  Lurking in the tall weeds near the river was a doctor, waiting to hit me with one of his infected cleavers.  I had picked up the kill on LeBlanc, so I had an extra stack on my ultimate.  As Dr. Mundo charged at me I kited just slightly into my creeps.  That extra damage, coupled with my ignite let me finish Mundo off before he could retreat.  I was on a roll.

I started wandering the map after I would kill LeBlanc, looking to pick up kills.  This game snowballed so hard.  I was honestly shocked when the enemy team didn’t surrender at 20.  I felt bad for Sheik9 because I knew how to play against LeBlanc better than most people would.  I added him as a friend so I could give him words of encouragement and some pointers for his next game, but my friend request was never accepted.

I would like to point out that this is probably the fault of Riot’s Match Making system, and also that Sona did a fantastic job at having more gold than her mid, and leading her team in kills.  Way to go, Sona! 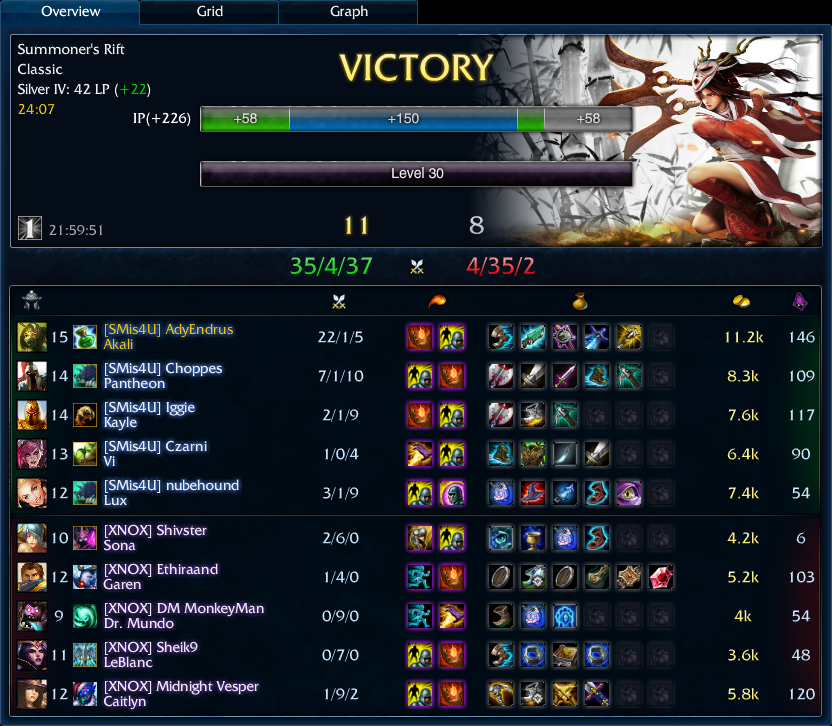 This game started and Sona basically asked if I was competent.  wut?  She wanted to know if I would be willing to swap and play the bottom lane two versus one against Taric and Vayne.  I said I would be glad to, and went to bottom lane.

I played very passively, happily giving up farm because I was out of range.  It seemed like Mundo lived in bottom lane.  He would show up every time I needed him without ever needing to ask for him.  Because of my ability to stealth with my shroud pool, I was able to deny their poke burst combo with Taric’s stun.   I wasn’t able to farm the creeps as well because of how close I would need to get to them, but I was able to participate in a number of kills, and still got my fair share of experience and gold.

I apologized mid-way through that game because I was so far behind.  The two players started laughing at me.  They pointed out the fact that at that point when I had about 70 cs, Skarner had 21.  Wow, Sona’s idea to lane swap had put us so far ahead!  Even with a limited build on Akali I could wait for Taric’s stun to be down and just pounce on Vayne.  Playing 2v1 just after getting my ult I could cut Vayne in half with two Qs and one charge of my ultimate.  She had some hard feelings about my shroud, but I just ate an orange and it was k.  The win streak continues. 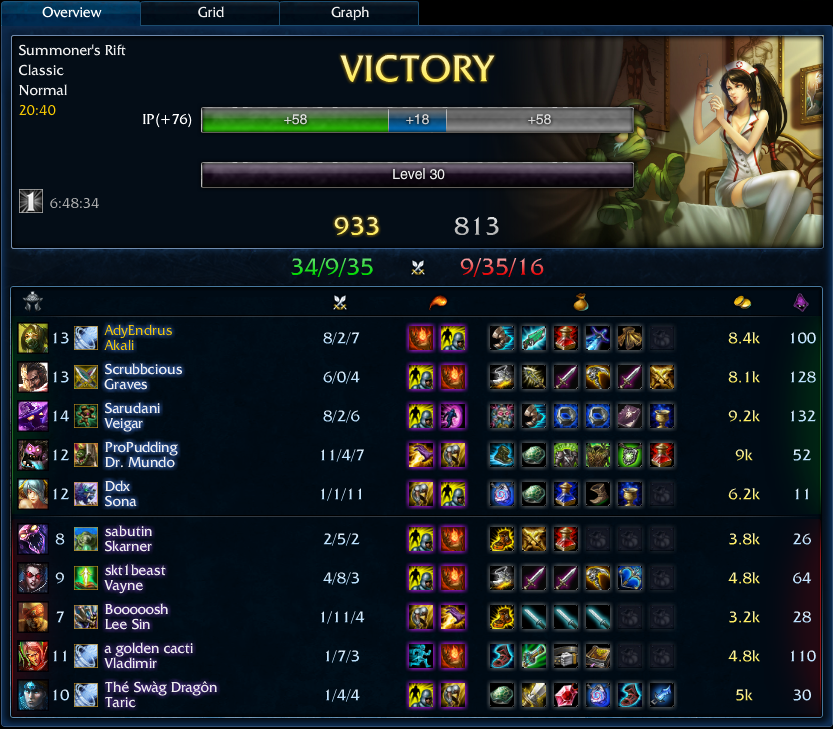