Who knew that Senor Choppes could play the support role?!  It really felt like we all picked roles and Jake was stuck with last pick so he played support.  I was a bit skeptical going into this game, but it all worked out in the end.

During the loading screen I saw that the enemy team was running some kind of kill lane.  I was watching a movie so I had my microphone muted.  I forgot to mention to Jake that we would probably need to ward really effectively and play back a bit.  We’re walking to lane and I realized too late and clicked to unmute and said “Jake, look out.”  Boom.  Jake was throwing a ward into the front edge of the bush anyway and there was a Taric and Xin standing there waiting for us!  They still tried to go ham on Lulu, who just laughed and skipped away.

We dominated that lane.  I had nearly 80 CS when the enemy bot lane had 15 combined.  They were starved of experience and money, and just let us walk all over them.  My only death actually came when I was killing both people in bottom lane and Lee Sin snuck down and caught me.  His abilities show me through stealth, and I was so low on mana and health that there was no way to escape.  It was sad.

I definitely secured some kills at the end of the game to tie for most kills in this game.  I just wouldn’t be able to sleep at night if our random Kha’Zix had most kills. 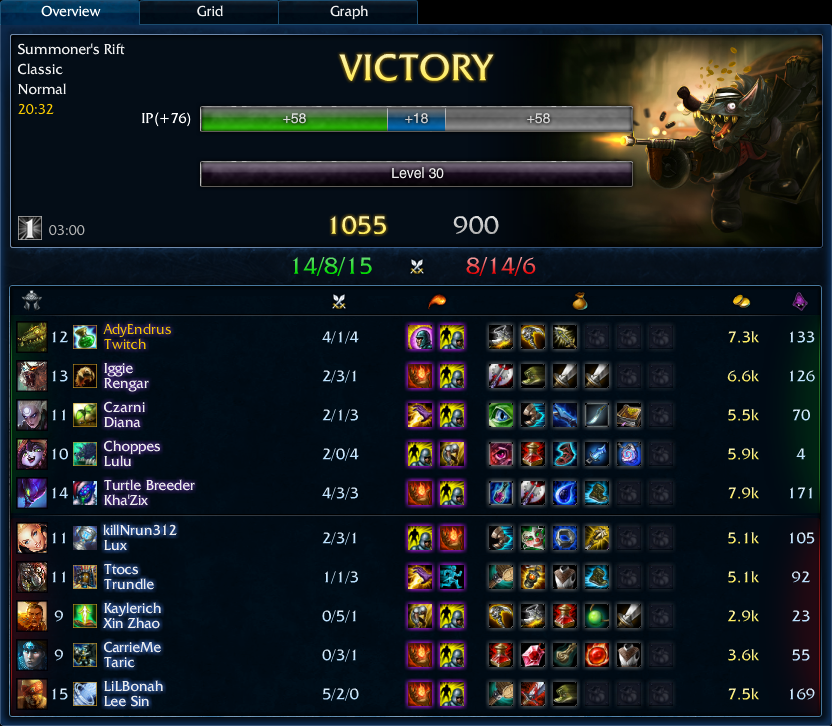 Our early game was extremely rough.  Having Jarvan IV in lane means that you should either play aggressive or just watch him die.  Vayne had me to below 50 health probably three times in laning phase.  I felt bad for her.  If she could have gotten those early kills she could have snowballed the lane.

Let me tell you how a normal engagement would go: J4 rushes the enemy Vayne.  Blitz rushes me.  J4 gets to Vayne, auto attacks her once, then tries to disengage.  Blitz gets to me.  Punches me in the air, hooks me to him, drops exhaust, and continues to attack me so he takes minion aggro.  Vayne can just ignore Jarvan at this point and starts shooting me while I’m running from Blitz!  I hated it.

We got ahead a bit in bot lane because of expert ganks from our jungler.  Once we were ahead Jarvan’s mentality of “run at the enemy” started to work like Blitz’ was working at first.  I was farming calmly when I saw Jarvan go ham on the enemy team.  I realized he was probably in trouble.  I went running up to help him.  As soon as I’m within auto attack range Jarvan disengages and Blitz hooks me under the enemy tower.  Seeing that I’m going to die I kill Vayne before going down.  I then calmly explain to Jarvan that I don’t know how to help him do whatever it is he’s trying to do.

Our laning phase wasn’t the greatest experience for growing a super machine AD carry, so I was actually pretty glad once it was over.  I quietly scaled into a six item monster.  Nasus was really upset with me and he would wither me and hit me for half my health.  I learned at a young age to cleanse the wither and just DPS him down while he tried to solo me.

Late game fights were not a problem.  Just about my whole team was fed, so I just had the luxury of sitting back and avoiding crowd control.  When their Lux would ult me I would drop to below half health.  Many team fights were decided by lasers.

I did try to give Zed some constructive feedback about his laning phase, which at first he took offense to it.  I explained why I was giving him the advice and ended up getting honor from both of our randoms that game.  Though I didn’t do all the carrying, I definitely pumped out some serious DPS this game. 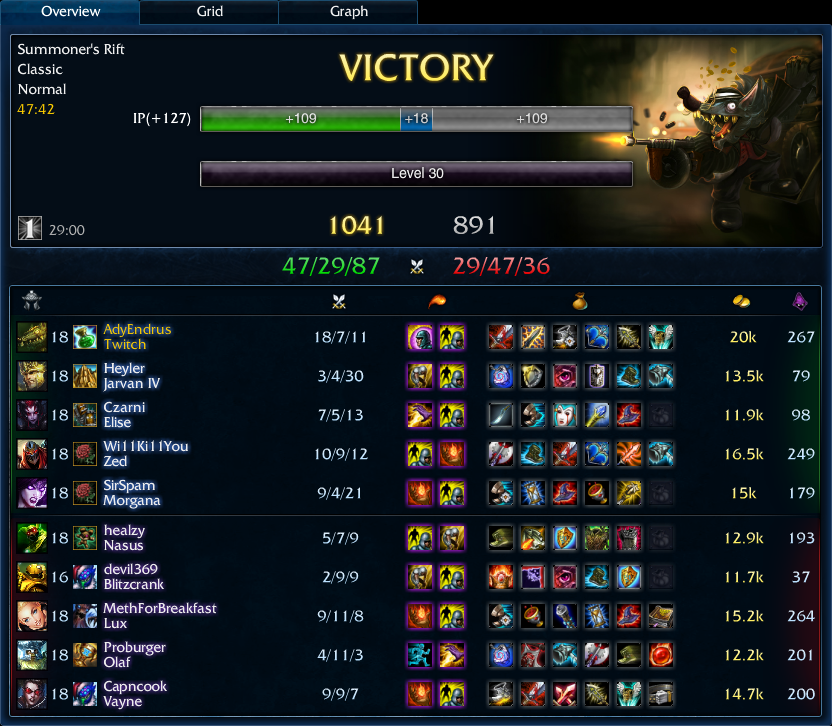 I always blog about my victories, but people never get to see my losses.  Maybe I like it more that way, but I don’t want to mask the sad truth; I lose games sometimes.  Luckily, I get to pick which games you see, so this will be my example.  You’ll notice the positive KDA and highest creep score in the game, but if you would have been in that game with me you would have believed that we could win.  That’s what I believed as I was playing.  I knew we could win this game.  All we had to do was somehow DDOS Irelia.

This game started better than it finished.  We probably shouldn’t have dragged it out this long.  Our bot lane was insanely strong with Ezreal/Lux.  Very skill-shot dependent, but high range and damage.  Lux and I shared kills, but she let me farm the creeps.  She was an exceptional Lux.  Despite a mental misstep of my own causing me to lose my Flash early we still were able to zone bottom away from creeps.  My 5-0-5 start combined with Lux’s similar start are not shown in this game.  Some team mates are too heavy to carry.

Losing out on five early kills to my support and jungler didn’t help me this game, especially when our top fed three kills and then rage quit.  I don’t know if he was ashamed or just bad, but if you’re going to take a solo lane and lose it you may as well stick around to help your team as best you can.  If you can’t survive top then gank mid, steal jungle, or gank bottom and take Dragon.  Your other option is to not feed three kills to top in the first five minutes of the game.

We stayed in this game, and had surprising success.  Our game plan was to ignore Irelia.  She was already fed.  If she showed up, we ran.  If we could team fight without her then we could win.  She actually verbally attacked her Corki after the game, saying that he was non-existent, so it was a 4v4.  He was still richer than anyone else on my team.

I probably should not have gotten another BF, and I probably should’ve grabbed a Last Whisper, I just was hoping to get to Black Cleaver and sustain with it’s attack speed and armor reduction.  This would have let me melt targets like Annie, Corki, and Jax.  Unfortunately, they were able to pick off Teemo and push to end.  In the final seconds of the match Irelia Q’d to get on Lux and Lux died instantly.  It made me question why I don’t play Irelia every game; if she can two-shot a champion of equal level with two items that deal damage while not using a summoner spell or an ultimate.  Ability Power champions focus the whole game  and all of their precious money into items designed to make them deal damage, and Irelia can counter that with a Trinity Force and Wit’s End?  Balance in all things.  I hate you, Rengar. 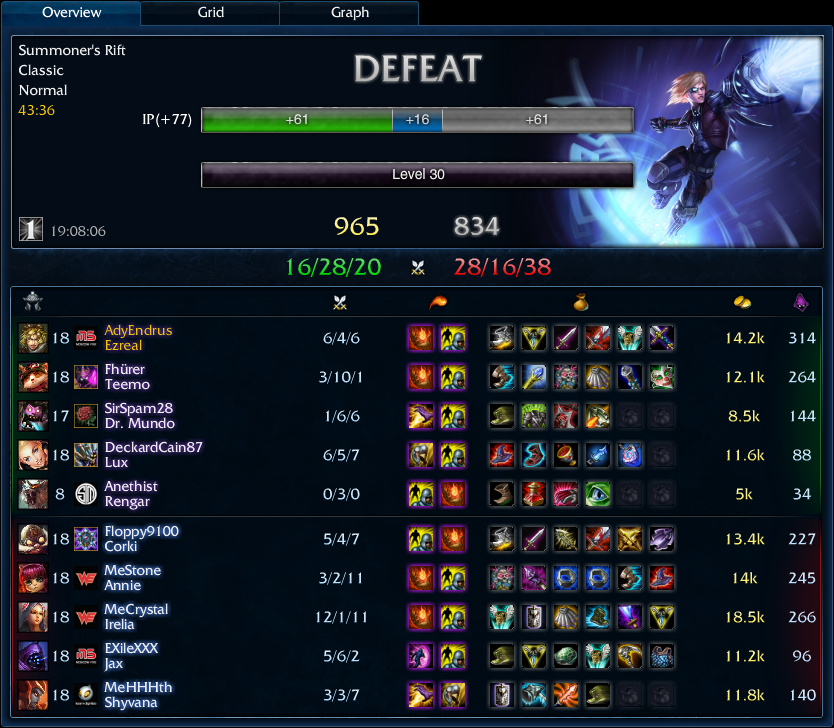 As four enemy champions converged on us in bot lane I realized I didn’t have enough mana for an Arcane Shift.  My loyal Blitzcrank support realized the same.  As we both started to run down the lane I turned to run up river.  Pausing momentarily in the bush at the mouth of the river, I waited to see where the enemy was going to emerge.  Udyr appeared out of the fog of war and Blitzcrank immediately moved toward him, then ran south, drawing out the enemy.  I ran north, giving myself sufficient space between myself and the next enemy.  Blitz just said “I’ll gladly die that you may live, but please, please carry us late.”  That was the trade we agreed to; I live now, I win us the game.

Another bonus to this game was that most of my team did well.  Nubehound went even on kills and deaths, and Iggie and SirSpam28 were only negative one kill.

Iggie won his lane despite losing first blood to Kha’Zix.  I had flashed and ignited to get second blood on Janna, but had fallen behind because of it.  I fell further and further behind as we had more and more pressure from jungle, mid and top.

My favorite line from this game was when Lux said “Stop farming and group up mid so that we can win” at the 15 minute mark.  So I countered with “Yes, group up mid to lose out on exp and gold so that we can lose quicker” as we were a ways behind.  Needless to say I stayed in bot lane and farmed my brains out.

Sadly, I finished this game with 4k unspent gold, never getting a chance to have crazy crits or absurd burst or a second life.  I swear I remember critting that Janna like 4 times with just a Trinity Force.  Poor girl.

As a final note I think Lux players who are matched against a hard pushing champ or a burst champ should get a chalice and upgrade to Athene’s Grail when they get a chance.  It comes with too many positive bonuses to be ignored.

I know 8-5 isn’t spectacular, but it was the 14k gold and 10 assists that showed the impact I had in this game.  I kept my promise to my loyal support Blitz! 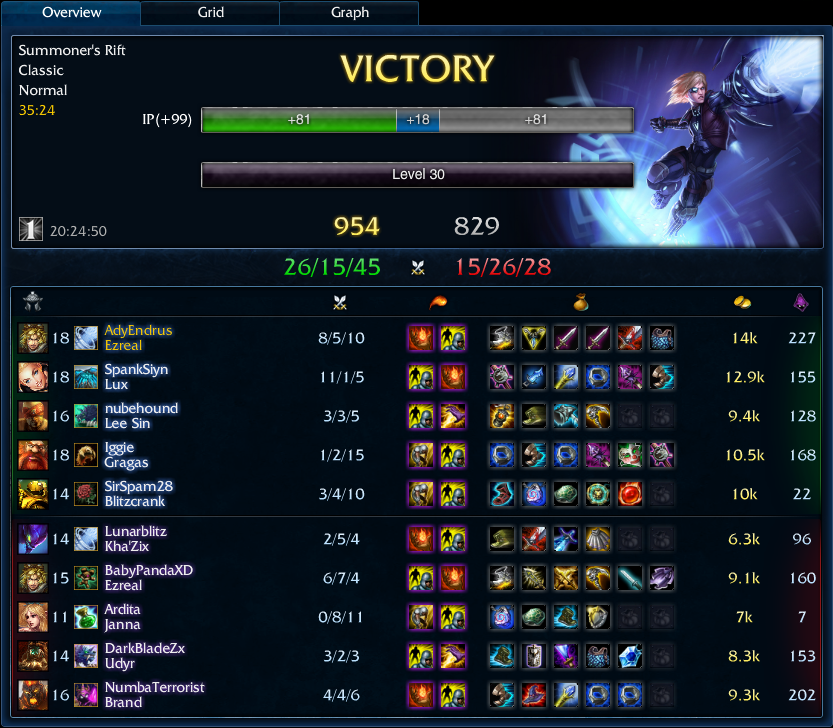 My support really shone early in this game.  Despite having played a good number of Ezreal games, I haven’t played him since he gained in popularity and is based more on the utility of his W.  I tried it out, though.  I maxed my W first and Q second, taking a point into E at level 4.  I felt fine in lane.  Late game was about the same.  Normally I would max Q and then E.  Maxing E second gives a surprising amount of burst if you save it to make sure it will hit.  Because you don’t get to aim it you have to land right on top of someone, or use it to escape.

Lux dominated our team from the other end.  As you can see, each of my team mates had a negative KD.  The exclamation point of this match was just after we had lost a team fight and I was running from their whole team.  Their team was FULL of CC.  Arcane Shift wasn’t enough to keep distance from an angry Olaf.  I actually had to flash just after he caught me with Undertow.  Lux, Taric, Ashe, and Olaf were all right on my tail.  I ran all the way from their base (they were blue side) up past baron, and then hooked back around behind him through the tri-bush in top lane.  I was building space between us and them.  They all gave up.  Except for Lux.  As I turned around to see if they were still chasing Lux shot off her Q and lined her ult up on it.  I E’d to the side to avoid the Q and got almost two full seconds to spam everything I had on her.  She went down in a wave of light and my team just started laughing.  After her team chased me all the way across the map I got a kill and they didn’t.  My sixth item is missing because I was dead at the end of the game and selling my stuff to buy a Bloodthirster. 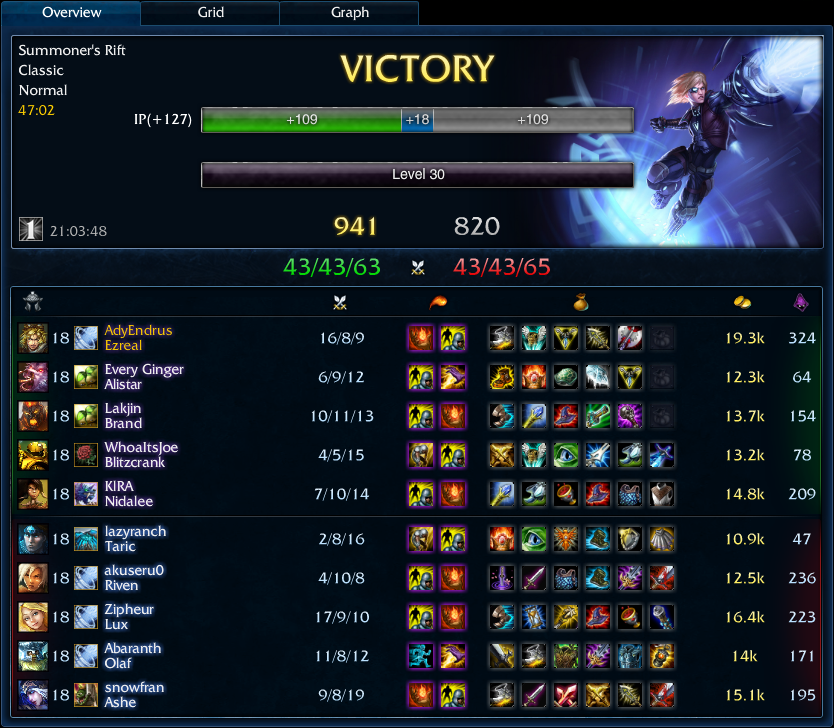