We played some fun games a couple Thursdays back and I wanted to post some of the results up here.  This was probably my prettiest loss of the evening.  If it’s any consolation, my second death came right at the buzzer because I got trapped between Trundle and Tristana.  I thought I picked the lesser of two evils, but apparently I did not.

This game only happened because I agreed with Jake not to ban out Elise if he wouldn’t ban out LeBlanc.  He stayed true to his word and I did as well.  This setup an epic clash of the titans in mid lane.

I didn’t get as fed as I wanted to, but I definitely did all I could to keep Jake from getting ahead.  He spent a surprising amount of time killing off my team.  It was very unfortunate.  I only made it to 20 stacks once in this game, which is never a good sign with Leblanc.  The enemy controlled too much of the map including Baron and Dragon.  We could never contest it.

I did have a few nifty escapes where I would get away with almost no health left.  It felt SO great sometimes.  I saw Tristana exhaust and ult my clone once.  That’s always entertaining to watch.

We had a really good time.  I hope we have more nights like this one.  If we can get 10 guys to show up for a night of League of Legends then we know we’re doing something right. 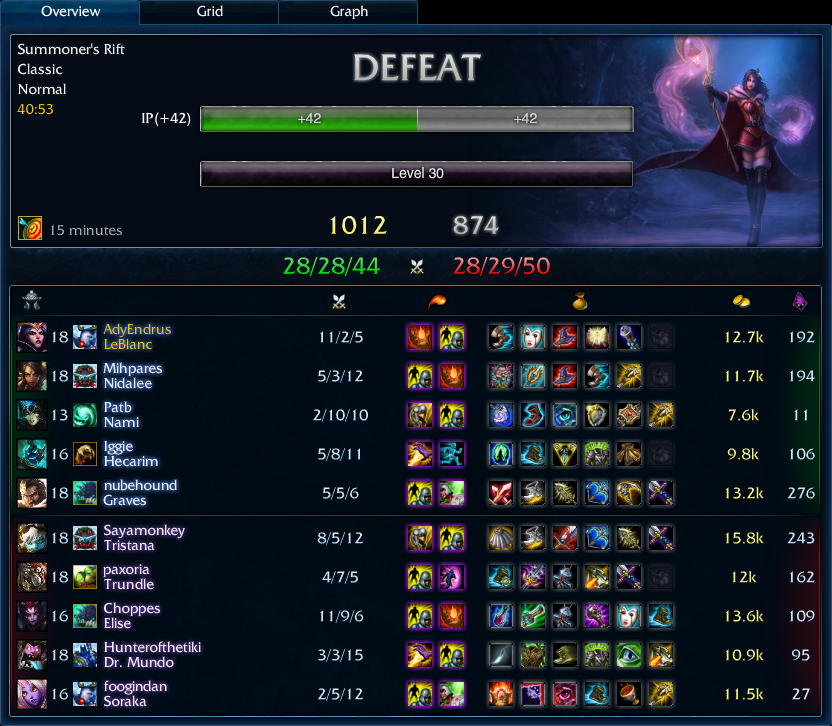 This is the story of a level 30 summoner who has two wins.  Two.  Normal.  Wins.  I would be extremely curious of how someone managed to do that.  Impressive, good sir. 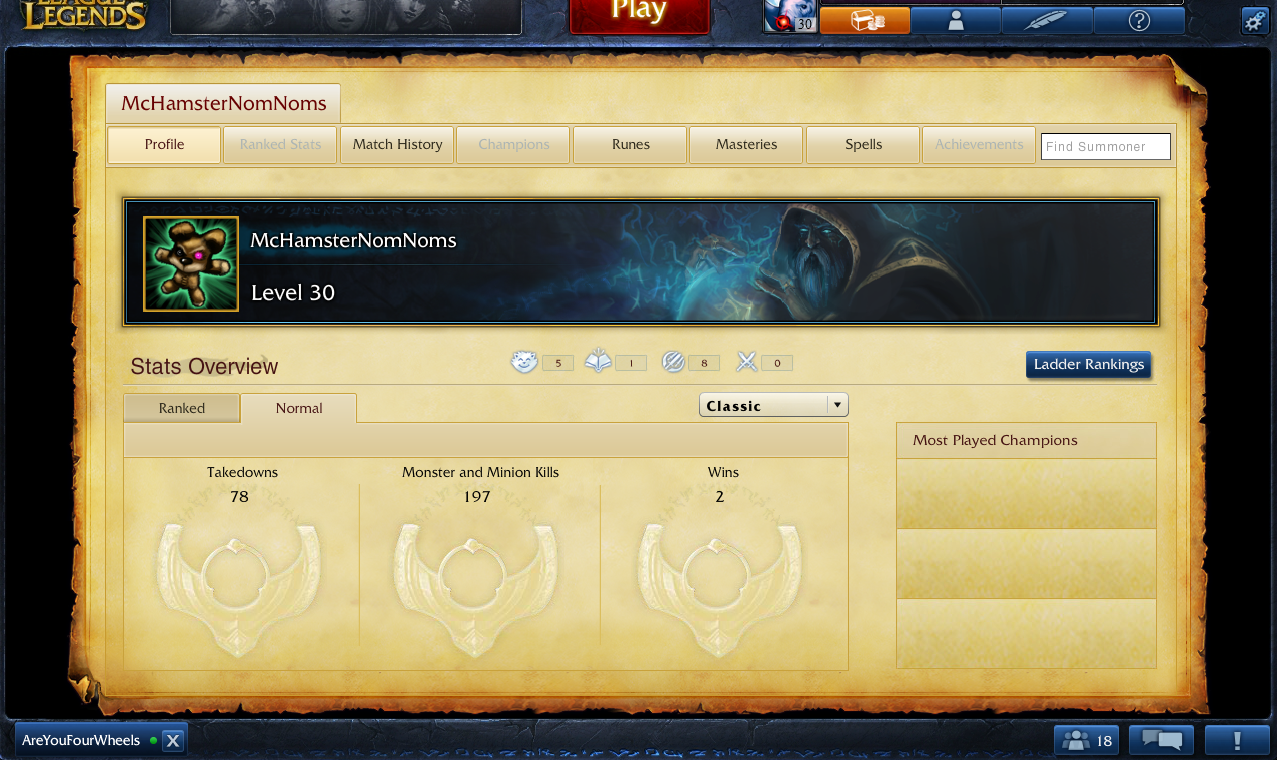 What has gone so terribly wrong with the world that you play Kennen and go 13/4 in an ARAM and you don’t even have the best score on your own team??  This game got out of hand.  Sona was willing to do just about anything to save me, and it showed.  I made the enemy team so miserable.  Teemo harass can really break spirits.  Some times I love this little bunny rabbit. 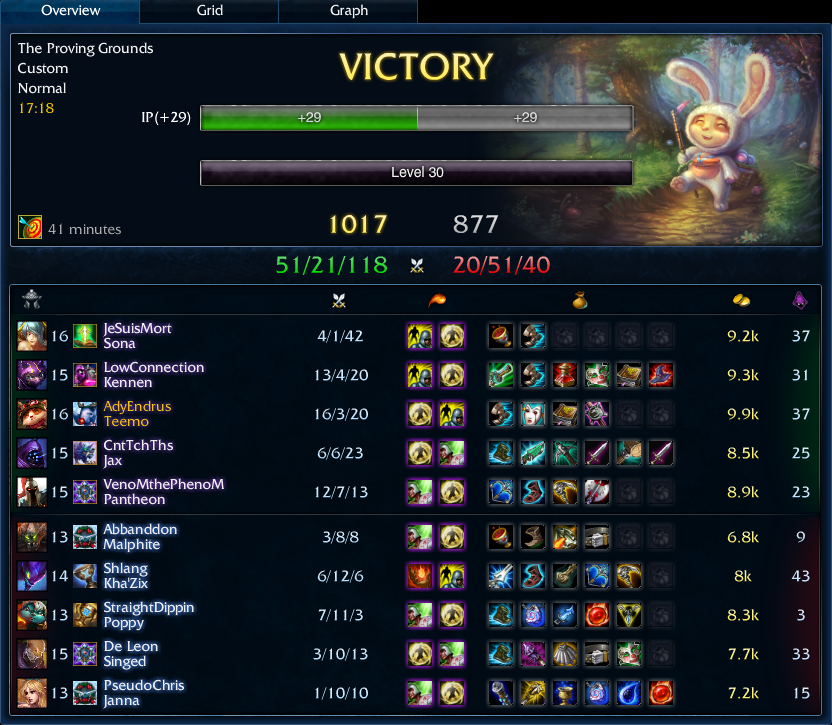 This was a nice, short game.  Mihpares hated it.  He said it was “too boring” which I really couldn’t relate with.  I think every time I get 17 kills before the 20 minute mark I am completely entertained.

Nunu started Blood Boil.  Now, I don’t want to argue that this is a bad start for Nunu, but I was expecting to eat an ice ball at level one and be forced to just grin and bear it while Kog got free autos on me.  Instead, I saw the Blood Boil and told Dan to go ham.  He got a hook and that was that.  First Blood and the ball started rolling.

When Fiddle came to gank I just laughed as he got pulled, punched, slammed, grabbed, uppercutted, and died to my ridiculous damage output.  The saddest part of this game was that I knew it didn’t have pentakill potential because the enemy team would surrender before we could ever get to a team fight stage.  I guess that’s not something to be too depressed about.  Most of my kills came from Nunu, Kog, and Fiddle.  They combined for 19 deaths.  That’s pretty close to my 17 kills and two assists.

I have to admit, when Dan’s grabs are on, they are on.  I don’t think he missed two grabs that whole game.  It was very disgusting for the other team.  Sometimes they surprised me because I wouldn’t be looking for him to make a grab, and then all of a sudden there’s a Kog on a silver platter.  I wasn’t lacking for damage, you can bring me a Kog any day!

Overall a fun game for Blitz and I, maybe not for anyone else.  The rest of our team combined for 6-6-7.  Sounded like eight people had a miserable time that game. 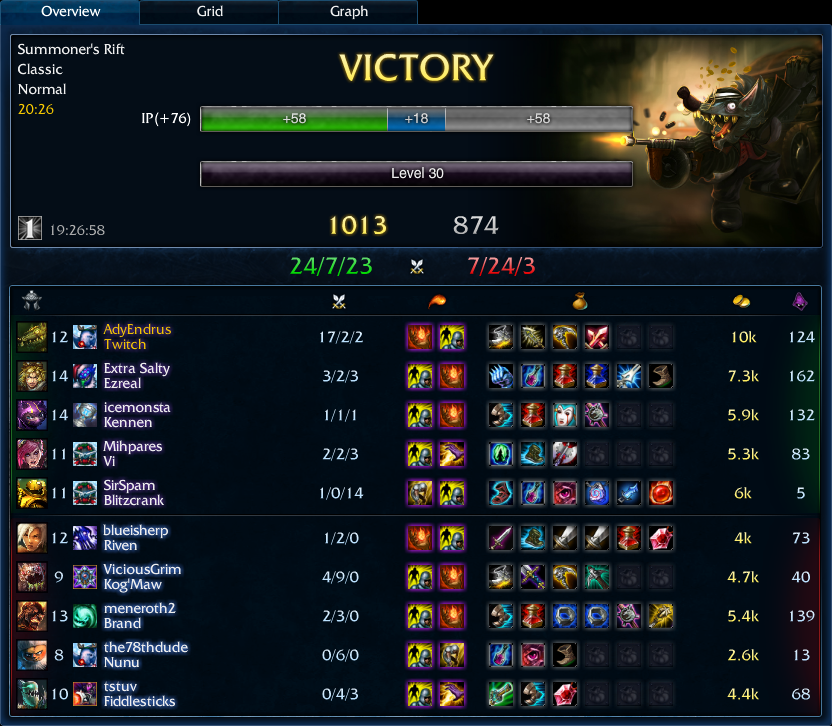 I’ve really lapsed at getting you guys updates as games happen, so this game is a bit foggy in my memory, but let me tell you why Taric support is OP.

Around level five Urgot had recalled to shop and Miss Fortune and Soraka were left tending the lane.  We had a huge creep wave, which meant that Miss Fortune couldn’t fight me or she’d risk throwing away all that wonderful gold.  So I fought her.  I stunned her out of the bushes, popped Shatter, and auto attacked her once.  She followed suit, which pulled aggro from my whole creep wave.  She immediately started to drop.  Soraka’s heal was on cooldown.  Miss Fortune turned to run, got stuck on a creep, and fell dangerously low.  I used Flash to hop past the minions and hit her with my big shiny mallet.  Boom, 2-0 Taric.  What’s up now, MF?  The response from my Urgot was “What just happened?  The jungler didn’t gank.  How did Miss Fortune die?”  That’s 1v2 power right there.

The game went past 30 minutes and I already had both a “slow you down” item and a “speed us up” item, so I got some attack speed.  My thinking was to be able to trade slightly better and spam more heals in team fights.  If I’m fighting with a Swain then I’d better bring some damage to the party or risk just dying.

The enemy team is pressuring Baron, but I had already cleared their wards once, and we had great vision of the area, so I was standing in mid lane.  Miss Fortune was also there, shooting creeps.  She had red buff.  I had mobility boots.  I decided now would be a great time to fight Miss Fortune.  I walk up, auto attack, and walk away.  No stun.  No shatter.  She doesn’t even hit me back or walk away.  At this point I’m starting to wonder if she’s completely AFK.  However, she is moving to last hit creeps, so she is still connected.  Something is wrong though!

Her team starts to group mid after a failed attempt at waiting on Baron, so I step down and left, along the river path.  No one follows me.  I move quickly and agilely through their jungle with the grace of a stylish man in pink garb.  I pop out right at the downed inhibitor in bottom lane.  I have a wave of minions with me.  We siege the base!  We being the minions and Taric, the Fabulous.

I pop my ultimate and drop the first tower thanks to my bonus attack speed and ability power from Malady (an item I never suggest anyone get on Taric ever).  Then I hear a glorious sound; the enemy has just destroyed one of our mid turrets.  That means they are still standing mid.  I switch to the next turret.  Boom.  It goes down.  Now I’m starting to worry.  How many are coming back for me?  Will I have time to win?

I switch my attention to the Nexus.  It’s at about half health.  I still have both of my summoners up, and it will be a judgment call if I use them to escape or to aid me in defeating the Nexus.  Swain walks into view.  I kite him around the Nexus with my attack timer.  I keep pounding on the Nexus with my gloriously large and marvelous hammer.  Swain is getting closer and closer and… further?  He walked right past me.  He didn’t cast a spell, never got an orange outline, never popped into his ult form.  He just kept on walking.  Boom, Nexus down.  Taric, the Fabulous has soloed the Nexus and helped lead his team to glorious victory.

So glad I got the last hit on the Nexus too.  That 50 gold really helped to nudge me ahead of our Urgot in gold. 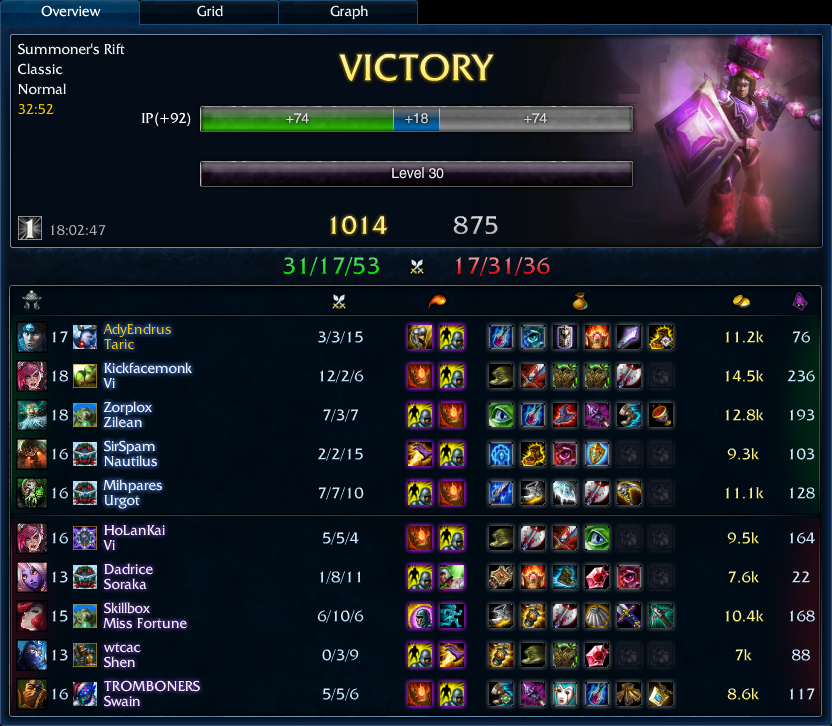