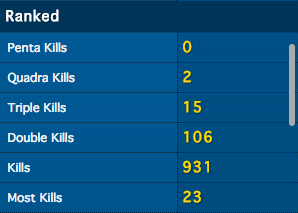 Last week’s predictions were eerily accurate. Riot predicted a 1-7 Roccat club to go 2-0 with matches against Copenhagen Wolves and Supa Hot Crew. Roccat shocked the world (sans Riot) when they posted their perfect record this week. Because of these amazing predictions I can’t help but do another week’s worth of predictions, this one slightly more in-depth to try to dive deeper into individual player stats. Welcome to another week of Riot’s Predictions!

SK vs Alliance = Alliance will win. This will be the harder of Alliance’s two match-ups this week, so expect to see 2-3 deaths on Wickd, and 1-2 on Tabzz. However, closer game = longer game, so count on high fantasy points. Alliance will be getting first blood, plus at least 6 turrets (5 needed to win).

SHC vs Copenhagen Wolves = Supa Hot Crew will take this one. Wolves are in a down-ward spiral and are estimated to drop both of their games this week. This might be when Mr Rallez dumps in for some of his 650 predicted CS this week.

Millenium vs Roccat = Millenium beat Roccat this week. Millenium had looked solid all split and even more so last week when they went 2-0. We’re not expecting another 2-0 week from them, but expect to see Jesiz go at least 4-2-6.

Gambit vs Fnatic = Fnatic aren’t losing a game this week, so Gambit won’t change that. Gambit has been struggling, Fnatic has been gaining better footing. sOAZ has been climbing each week (31, 39, 42) in points. xPeke keeps breaking fantasy records. If you have a Fnatic player, get them on your list this week. It is predicted to be a good day to be a Fnatic!

Roccat vs Gambit = Bottom of the bracket has to go to a team, and Roccat are slated to win this one. Poor Gambit just can’t catch a break. Their estimated points are plummeting until they start putting up numbers or winning games. Losing in a stomp is a good way to net negative numbers, which is Edward’s forte.

SK vs SHC = SK can win this game. They opened the split in first place, and SHC is just breaking even. I wouldn’t count SHC completely out, Mr Rallez can pack fantasy points in, even when they lose. SK is going to cash in some points this game.

Fnatic vs Millenium = Fnatic continue their dominant week. Again, this could turn out to be a close game, which results in a longer game, which results in more fantasy points. xPeke is predicted at 38 points on the week, and he did more than that in one game last week. He has been a fantasy all star and he’s showing no signs of slowing.

Alliance vs Copenhagen Wolves = Alliance continues their 2-0 week. Wolves had a roster swap last week and will be trying to get their mojo back. Hopefully they can prolong a game against Alliance for fantasy’s sake, but doesn’t count on it. Alliance has changed from their old EG ways and are ripping through games these days, which scares fantasy owners!

I think Riot’s predictions are a bit conservative this week. No one has managed to maintain xPeke, even when his team loses, but his fantasy point estimate is still very low.

Last week I noticed that in the Fantasy LCS weekly predictions different teams were predicted to win games. By knowing that coming match-ups, and relying on the fact that each match would need a winner, I was able to deduce that Riot predicted which team would lose in each match-up. I did the same for the NA LCS Summer Split week 4, and here are the predictions.

Cloud9 and Evil Freaking Geniuses are predicted to go 2-0 in their matches this week. Cloud9 is set to beat TSM and Dignitas. Both of those games should be fun, close matches. Cloud9 has a better record against teams above .500 than other top teams, but they have struggled against teams on the lower end of the bracket. With two games against teams at or above .500 expect Cloud9 to post good fantasy numbers this week, doing what it takes to “drag” games out and win.

Evil Geniuses play against LMQ and CLG this week. LMQ seems like they would match up well against EG, but as EG gets more experience they seem to be meshing well, and maybe Riot knows something that we don’t that is affecting their prediction. CLG has been getting better and better. Dexter is still improving (54.17, 25.07, 28.20 week by week) in fantasy. Aphrolift are still winning lane and helping to win the game. The current 4v0 start meta is really benefitting the late game potential of that bot lane, letting Double farm safely, and letting Aphro make plays with the cow.

Curse and Complexity both have zero wins to look forward to this weekend. Might be a good week to bench Voyboy. Just be happy Riot predicted eight winners this week rather than the seven they predicted last week.