This game had one of the closest team fights because of a late-game Miss Fortune that almost wrecked us.  However, she made a critical mistake and instead of the penta kill for her team, she picked up the ace for our team.

Our whole team had an extremely high level of kite potential.  We never really put it to good use until the final team fight.  We lost a fight at Baron and were scattering down the river towards mid.  As we were passing over mid, all members of my team below 1/4 HP, Miss Fortune came bustling from just south of her team.  She was at full health and had the build you can see below.  It looks like she forgot to pop her Red Elixir, but I don’t think it would have made a difference.

She chased us down the river, with the potential to kill almost any of us with one click.  Staying just outside of her range we waited for cooldowns.  Her strut put her in range of my Noxian Corrosive Charge.  When that landed on her I think she realized she was dead.  Enabling my Terror Capacitor allowed for my Acid Hunters to slow her movement and crush her HP pool.  After a barrage of Acid Hunters I could see that she wasn’t going to make it.  I can’t remember who snagged her with a skillshot, but either Lee or Lux pegged her from range and just finished her off.  This immediately ignited our hopes, and we turned the fight around.  With Miss Fortune down, and Akali killed in the earlier engagement we knew we had the victory.

Urgot can still be strong in Solo Queue, but I had to dominate my lane, while avoiding Zyra plants, and it wasn’t easy.  Even with my lane dominated, we still got plenty of action in bottom lane from the enemy jungler and Zilean.  This tie game goes to Urgot, for making sure his team didn’t throw.

I just wanted to throw in the fact that this Jarvan was an idiot.  We had won a team fight, but weren’t strong enough to take Baron, so we shoved mid.  We called to retreat so we could get to Baron fast enough before the enemy team did.  I stepped to recalled, bought Home Guards and Oracles (because my team had negative KD’s and I had money) and rushed to Baron.  At this point I did exactly what I was supposed to do.  I was not the one who called the retreat, I was respecting someone else’s judgment call to avoid getting caught by the enemy team.  I was at the objective we were trying to secure, I was clearing wards, I was full health.  The rest of my team stayed mid, pushed another tower, took inhib, and got caught.  Were they expecting to escape from Zilean and Akali?  Why?  It was such a dumb move that put them further negative and just made the game harder for us as a team.  Idiots in Solo Queue, let me tell you what I told my team that day: “Greed loses more games than anything.”  Close games are lost by greed.  Overstaying your welcome, trying to dive for that one kill, extending for that last CS without a ward, it’s these little things that cost you games.  Get back, heal up, get in position for Baron as five.  Don’t allow a late-game Miss Fortune to ruin your day.  You’ve already won the game because you are getting carried, don’t make it more of a burden on your team. /rant 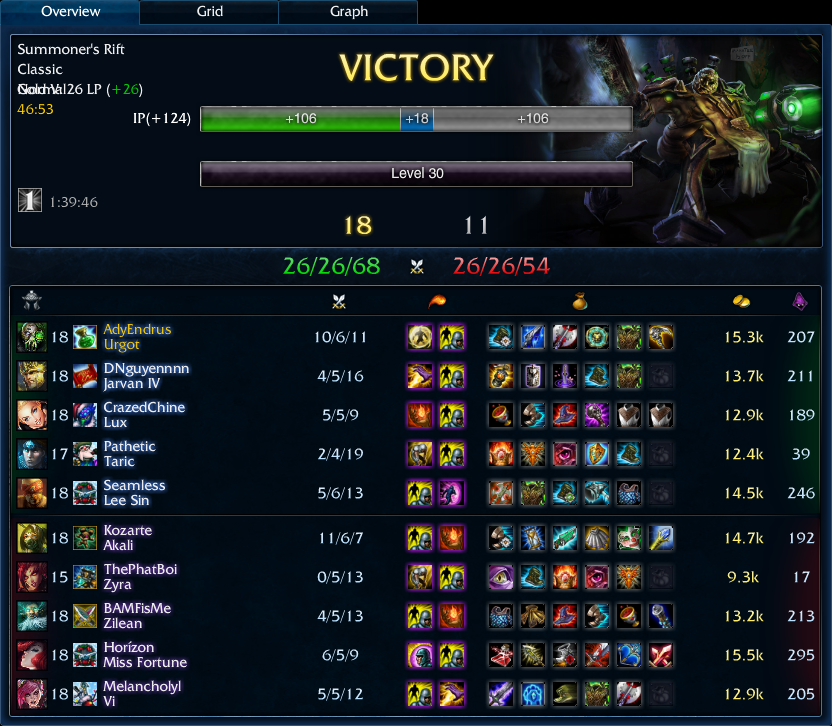 They recently upgraded match making to take into account the number of games played.  To me, this means that I’ll be playing with more people around 1000 wins.

The first thing I hear after getting into this game is the other team complaining about my Ezreal pick.  They are saying that it’s FOTM and cliche.  That’s all well and good, but I’ve been playing Ezreal for longer than some of these people have even been playing!  It’s not fair for them to attack my champion pick unless I turn out to suck with him!  Time to prove all the haters wrong.

0/6/1 Vayne speaks volumes about how bot lane went.  I would have killed to have a Nunu support, but Taric ended up doing just fine.

Our mid lane got really fed, so not as much responsibility was left on my shoulders to deal all the damages, and Kayle was also building ADC, so I decided to go Frozen Fist and Static Shiv, which is what I like to call “the fun build”.  It’s honestly not so much about dealing sustained damage.  However, you still have a considerable amount of damage.  This build is about kiting with Q.  If you land one Q then the whole enemy team is slowed.  That means you get another one for free.  However, landing the first Q drops your cooldowns by one second.  Chaining multiple Qs means that your abilities have no cooldown.  With the cooldown reduction from Frozen Fist, combined with each Q landing lowering the cooldowns, it feels very spammable.  You can escape from anyone chasing you except for Riven.  She’s still broken because she doesn’t have to walk, she just uses abilities to catch you.  If Cristina Vee wasn’t so cool I would hate the guts out of Riven.

I had a really sick snipe this game too.  Lee Sin got away from Diana with just a speck of health.  I shot my ult from bot lane at their middle inhibitor and saw as it tagged Lee Sin.  He started to rage about how that hadn’t hit him.  Later, he wanted to report me for “hax” as I was able to hit him with Q three times blindly as he ran in the fog of war.  I love it when people think I cheat.  It makes not cheating that much better. 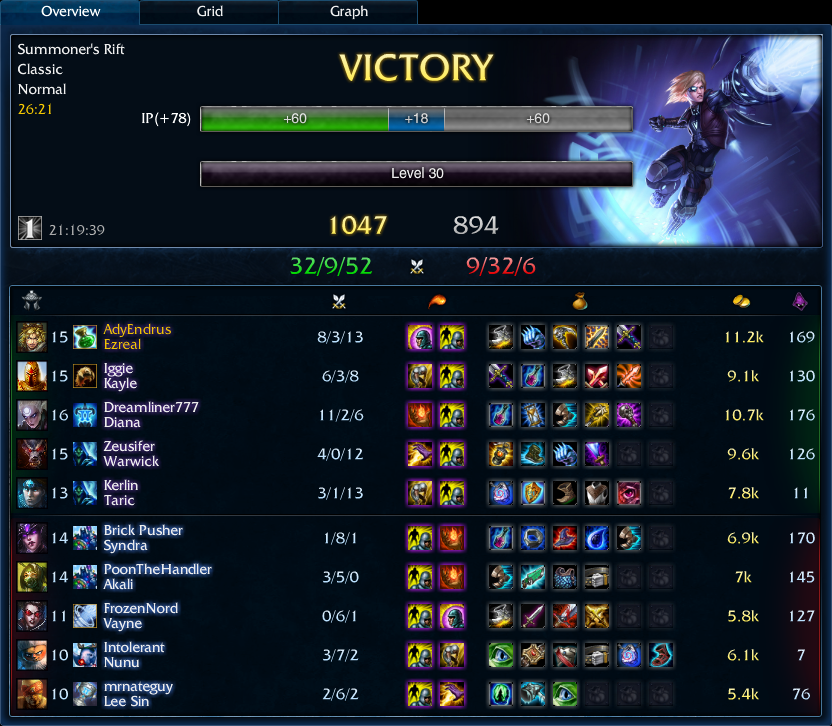 For those of you wondering, it’s not a thing.  You can’t do it.  Stop trying!  Having a snare doesn’t match up with a shield or a heal because the enemy ADC can still attack while rooted.

This game got really ridiculous.  Ezreal had a way to avoid damage and escape from Kog’s ridiculous damage.  Ryze, on the other hand, didn’t have escape as part of his kit.  Ryze would lead in with his Rune Prison, and then Lux and I would turn on him.  If Lux landed a snare then Ryze died.

Nubehound doesn’t normally play Lux, and had actually never tried Lux against humans.  This was his time to shine, his grand premier!  He actually did really well.  He timed skill shots well, used his slow effectively to check bushes, etc.  The only time that made me actually laugh was when I was walking back down the lane towards my tower to recall (no enemies were around) and he chimed in and said “slow down so I can shield you.”  I just laughed because it was like he wanted to try that ability out on someone!

Lanes were won very handily.  The enemy team was ready to surrender shortly after 20 minutes.  This is not normally the case with our poke comps!  Normally we expect lane phases to be a little bit more difficult, but our late game pressure forces teams to surrender.  It was a nice change to have lanes won and a team willing to throw in the towel! 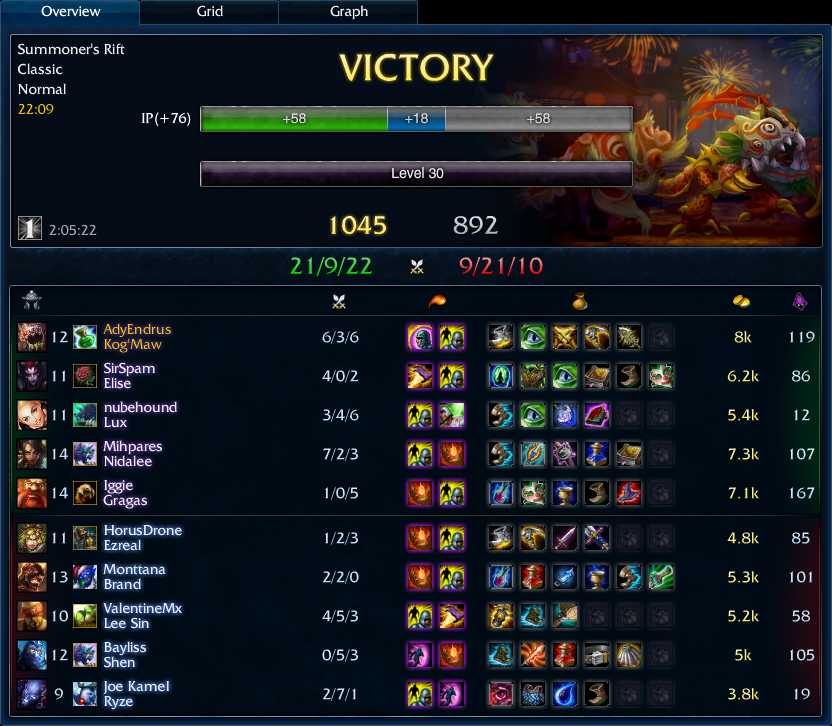 I hit the 4800 IP milestone and I had been on a streak of ADC games, so I figured it was about time that I unlocked Miss Fortune and tried her out.

I felt bad asking my support (who was really trying to stay in character by screaming “PURPLE” as often as she could) which ability I should max first on MF.  However, I didn’t want to lose a laning phase because I didn’t have any idea what I was doing!  Luckily, MF’s abilities were very standard.  She also lanes quite well against Ezreal because of her high mobility from her passive makes it easier to dodge his skill shots.

Once I got the hang of the champion I really felt good progressing through the game.  I ignored attack speed as a stat because I knew it wouldn’t help my ultimate, and I hopefully wouldn’t have to duel anyone, just participate in team fights.

Luckily for us, Heimer beats Malphite mid, Fiora handled top nicely, and we won bot.  With so many won lanes we just rolled into late game and forced a surrender vote.  I’m still a believer that the feeling of getting shoved under your turret by Heimer with no way to push out really causes a team to want to surrender. 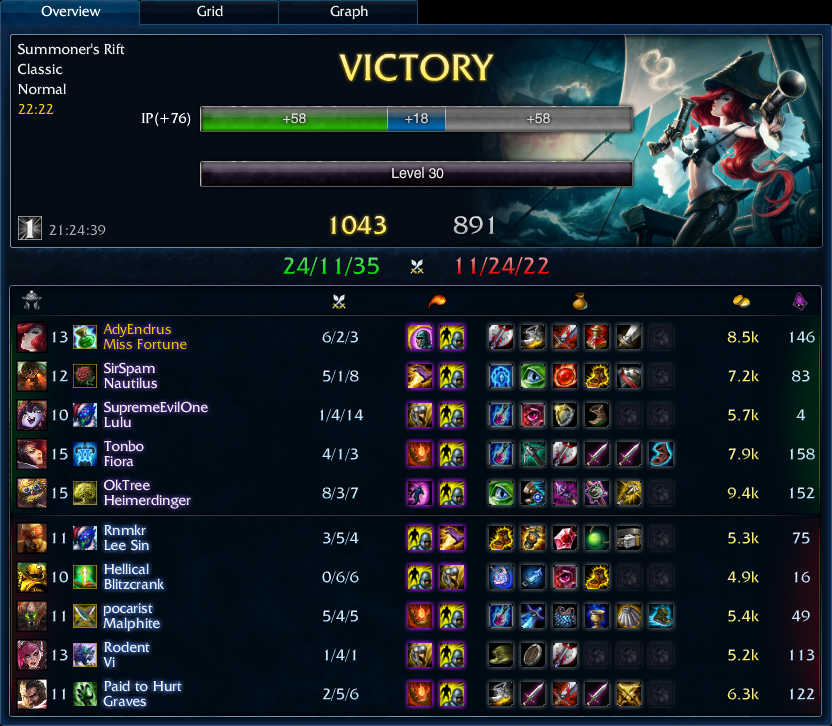 In the loading screen of this game I thought it was pretty cool that I had a Platinum Nunu on my team.  I congratulated him on hitting that milestone.  He countered with “I’m actually more like 900 elo, I just got carried.”  Haha!  This kid gots jokes!  I just wish he was kidding.

During the loading screen it looked like we would have a Blitzstar lane, which is Blitzcrank and Alistar.  It amounts to a ton of crowd control and the worse possible situation for an AD carry.  I didn’t think that the Blitzstar lane would give us much of a problem as I had faced it before (when I was Kog) and had managed to do well against it.  However, Dan started to spectate my game and said “That Blitzcrank is diamond, wtf?”  Gulp.

I was 7-7, which isn’t a great score in my book, but I was improving from 3-7!  We were chasing down Blitzcrank.  He ran all over through our jungle and got away.  I started to recall only to be grabbed by Blitz through a blind wall and pulverized by Alistar.  7-8.  Blitzcrank wrote “so easy”.  You could physically see the blood pumping through my veins when he wrote that.  You dare to mock the Kog?  Have you not seen Kog’Maw?  He’s literally a monster!  I wanted to write “the only difference between you and me is I have a late game.”  I refrained.  Instead I wrote it with my unofficial penta kill.

I went from 7-8 to 18-9.  I got so nasty.  I just sat back, let the tanks tank and I just blew kids up.  Blitz tried to ignore the fight and just run for me.  I cut him so hard that he just turned to run.  We cleaned up their team, took Baron for free, and just wrecked their base.  After I killed Blitz again I wrote “gg so easy” much to the enemy team’s dismay.  I really loved the threats of getting reported.

My biggest problem with this game was when Blitz flashed to grab me and Nunu said “you should be staying away from him.”  Herp, derp, what the heck do you think I was doing?  If he has to burn Flash to get me I’m obviously not out of position, I just can’t do anything against that as Kog when my Flash is down.  He didn’t think about the fact that he only left lane after I got back to it.  Also, when I got dove under tower from behind by Alistar and Blitz I asked Nunu to sit on my hip and stop recalling when I was getting back to lane and he just responded “no”.  Yep, he’s a 900 elo Nunu.  You don’t play Nunu because Ice Blast is a fun spell.  You don’t play Nunu to consume creeps.  You play Nunu so that you can put Blood Boil on your ADC, and then protect them and peel for them and then wreck late game.  This Nunu thought that it came for free.  Instead I had to do all the work and it just bugged the crap out of me. 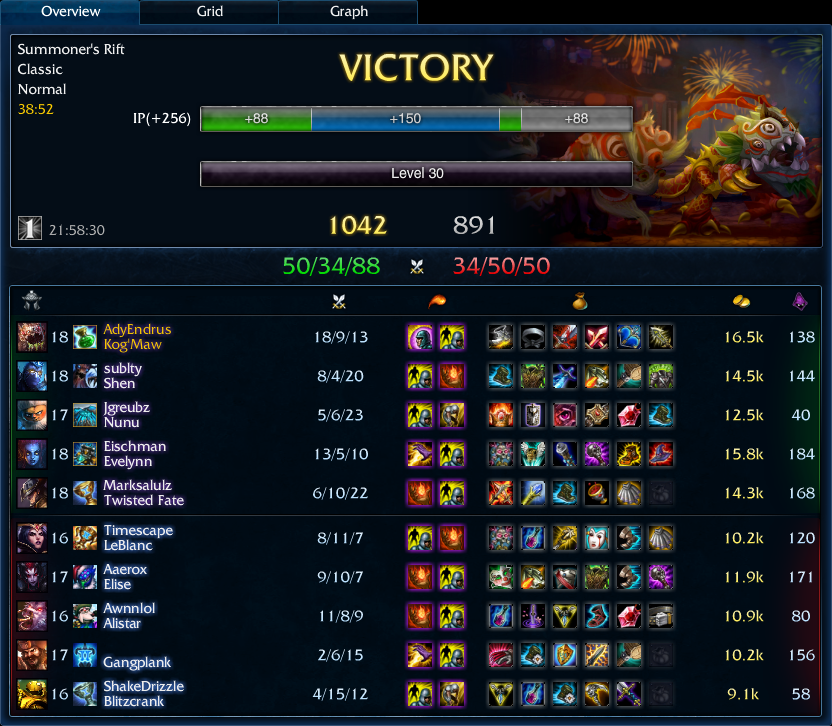