Do you lust over legendaries? Is your Hearthstone card collection slightly, moderately, or extremely incomplete? No? Then what I’m about to say isn’t for you. I understand that I’m a nobody, and there are plenty of somebodies out there to listen to like Trump, Kripp, Reynad, or Hafu. However, like most of you, my collection is far from complete, and I want to tell you how I made it to the top 2% of players this season, with non-meta cards., although if you like to play other games like slot games, you should try options as atlnightspots online that offer some great betting and slot games online. END_OF_DOCUMENT_TOKEN_TO_BE_REPLACED

We had the chance to play some ranked fives this past week and I opted to build Trinity Force on Corki. I hadn’t played Corki in quite a few months just because he had fallen out of favor with the meta gods. However, this game he felt completely dominating.

We opted to run the AD carry and support in mid lane. We have wanted to get better at keeping the carry in the short lane to allow us to zone the enemy, catch people off guard, and farm safely. We honestly hadn’t seen much success come from it, but we want to keep practicing it because it could give us the upper-hand if people aren’t expecting that meta.

This game was Lux and Corki against a Lissandra. Lissandra must have thought that I was AP Corki based on the items she built. I didn’t jump out to a ridiculous lead, but thanks to some effective ganks from nubehound and some amazing snares from Iggie we were able to get me a few kills in mid lane.

Eventually I did get shut down after I had six kills. I was shocked that I was actually that far ahead. I had a lovely play after dueling the enemy Lissandra in bot lane. I returned to base after a Dragon, and came right at the end of a bad team fight. The best I can do is embed the entire game, and tell you to jump to 27:10.

After that triple we stopped the enemy team from getting Baron and just chased them into their base to finish them off. After a valiant chasing effort by the entire team, Choppes managed to Slice and Dice to finish off Twitch!

What a ridiculous score for a ranked game. My Corki stats are so good this season. Now I won’t be able to play Corki again until the season is over. 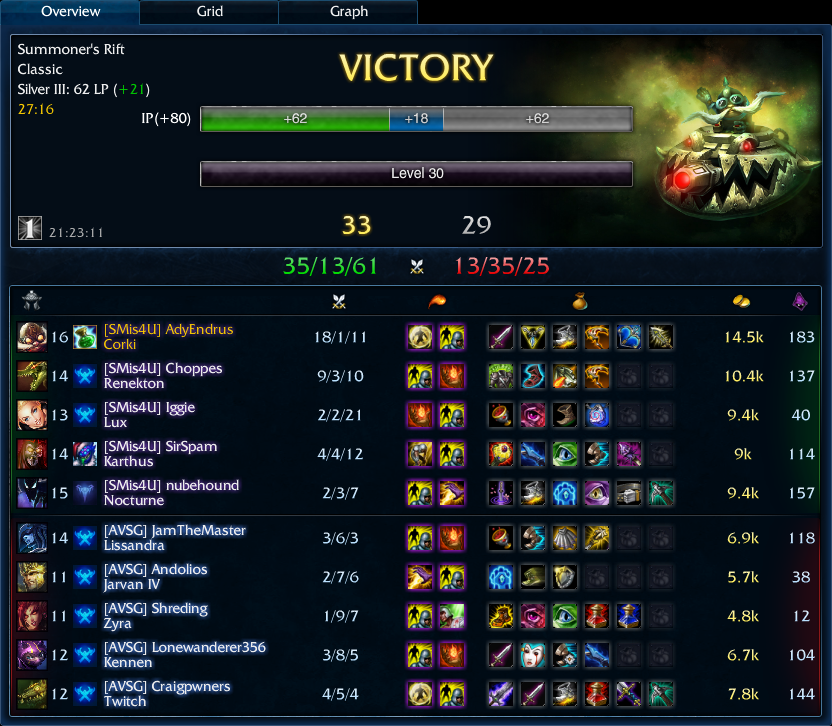 Normally I wouldn’t expect to have a season where I had a champion without a lost game. However, so far this season I am undefeated with Teemo.

Of all the champions I play I have never felt like Teemo was my strongest. However, he is my go-to champion when I’m headed up into top lane. I like the vision that he gets from his mushrooms. I like his passive. I like that you can build whatever you want on him and he does just fine. This game I decided to try a different build and see where it took me.

One of the strange things about my latest game was how my lane opponent acted. I picked Teemo because I felt like it would be a solid pick against Tryndamere. I was correct; he never even came to lane. He swapped Fizz for mid. I warded early because I’m a big believer in the ganking power of Zac. Zac still just jumped over the wall outside of my vision and, with the assistance of Fizz, killed me pretty quickly.

I’ve always viewed Fizz as one of those champions who is easier to bully in lane, but if they get ahead they can snowball and just make you pay. Now that Fizz had a kill up on me I figure he would play aggro and force me out of lane. I was darting back and forth, not daring to get last hits because at any moment this Fizz could just kill me. However, this Fizz was playing like we were in Diamond. Instead of just playing aggro and trying to snowball the lane he was just calmly letting me farm and minding his own business. If I didn’t shoot him, he didn’t stab me.

Now I have seen players play like this, and like just goes on and on. I remember a game where I was Mordekaiser against a Pantheon in top lane (that tells you how long ago it was) when I was able to walk PAST this Pantheon to last hit creeps and we would intentionally not harass or hit the other person. The game was insanely comical. However, if you are playing in solo queue and trying to climb and you get ahead, you should take full advantage and do what you can to keep that lead. I guess that’s just my opinion.

I managed just fine in my lane. I would get bored of pushing Fizz into his tower so I would wander down and shroom up in the enemy jungle and in mid lane. It was extremely effective because the deeper I got my mushrooms the better the chance was that I would see Zac, and not only coming to my lane, but going to gank mid as well.

Ultimately, I was a tiny furry creature on a large map. My impact in this game was extremely limited. I’ve considered running Teleport on Teemo because the ability to teleport to a mushroom seems extremely powerful at every stage of the game. However, instead of having that global presence I instead took Ignite so I can do better in trades with my lane opponent.

One of the memorable parts of this game was watching from top lane as four members of the enemy team shoved down mid and killed three of my team mates, leaving only Graves and myself in top lane. We came walking backwards up mid lane, moving towards the safety of our purple base, but the four members of the enemy team were standing between us and salvation. I started to hesitate. Could we 2v4 these guys? I definitely wasn’t big yet, but my Graves had a couple items completed. I didn’t know how much he had left in the tank as him and I had just killed Tryndamere.

The enemy team sees they have a numbers advantage and they have us trapped away from our base. The mistake they made was not committing to the fight all at once. They saw the low-hanging fruit of two easy kills and they each wanted to take full advantage of that. Graves killed them all. I popped Zac’s passive, but then let Graves get the last hit as I just laughed. This game was over.

Graves finished at a whopping 16-3, more kills than the enemy team. I was just along for the ride. It was funny to watch one man just pick a whole team apart. Now I’m one game into my qualifier and that much closer to Gold III. 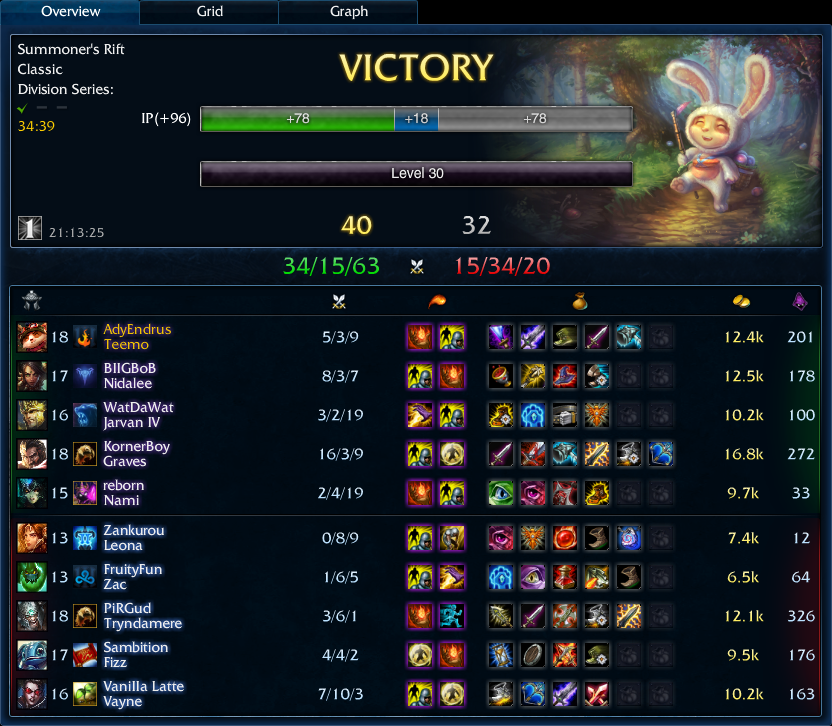 I have been working to improve my solo queue ranking to get a better idea of how much my skills have changed recently. I frequently see people who were Silver or Gold in Season Two, but have managed to jump to Platinum or Diamond this season. Just the concept of being Diamond and knowing that I’m competing with the top tier of players gives me hope and drives me to improve.

In a recent game as Twisted Fate I had the strange opportunity to have a massive impact in a team fight situation. Normally, I feel like Twisted Fate is ideal for creating an out-numbered scenario, where he coordinates a gank with his jungler and shows up to create a 3v1 or 4v2. Instead I fouls myself using my ultimate to warp into mid lane where we had already lost a team mate.

As I landed I threw the red card I had locked to deal area of effect damage and slow as many members of the enemy team. Immediately after that card landed Taric used his Exhaust to lower my damage output. I still threw my Wild Cards to finish Swain off.

Stepping back I worked on securing a gold card to peel the Rammus off of my poor Vayne that was doing a great job to resist his damage. After we finished off Rammus we poked Taric down.

It was at this point that I heard the announcer call out a Triple Kill and realized it was me. I saw Ezreal was fleeing from Nasus and Tryndamere, but had waning health.

I tried to move into range. My glimmer of hope was Ezreal stepping back towards the fight to help his Irelia. I pounced on that opportunity and used Flash to close the gap. Just as I entered auto attack range with my gold card locked Ezreal used Arcane Shift to distance himself. Knowing that he would think he was safe if I turned to fight Irelia I threw my Wild Cards where he would turn. Without another option I dropped my gold card on Irelia and waited for my team mates to catch up to her. Just as I had predicted, Ezreal turned to fire a Mystic Shot in my direction and ate my Wild Card, taking me up to a Quadra Kill.

I walked Irelia into her own base, securing another gold card and restricting her movement as she tried to escape. The passive proc from Stacked Deck readied as she slipped to beneath 100 life. With over 150 armor but a low amount of magic resistance my Stacked Deck shredded her remaining life and completed the coveted Penta Kill.

I immediately thanked my team. I clearly had not done all the work, but I had assisted in finishing off all the kills. I definitely let out an excited howl. It had been a long time since I had managed a penta in a ranked game. It’s different when your friends or the enemy team assists you. This was earned. I put my life on the line diving into the enemy team with my ultimate when I only had two items.

I’ll post the video link later or you can find it on my twitch channel. 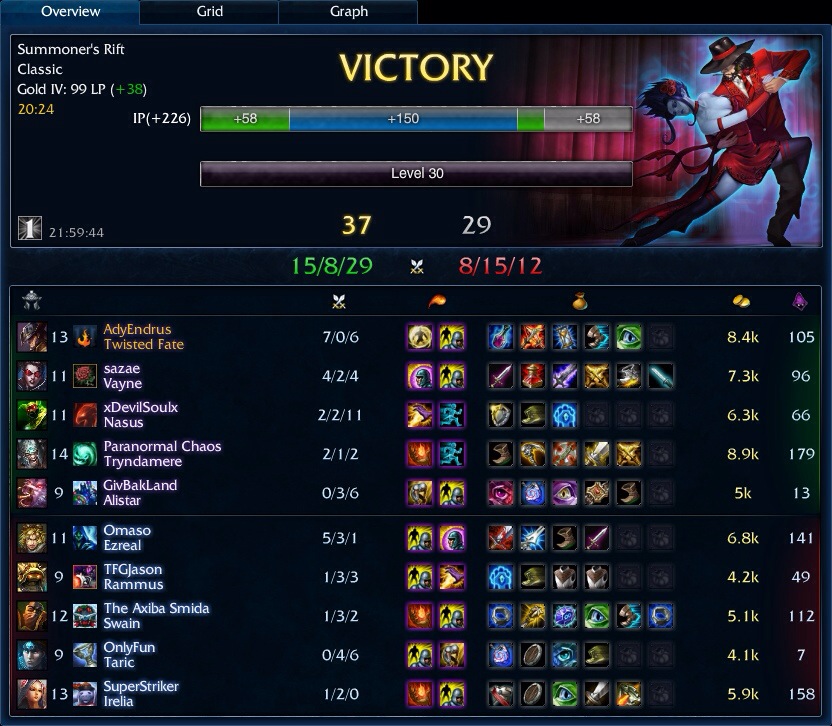 We played some team ranked games where I got to experience one of my worst LeBlanc games ever.  I fell behind in gold, creep score, and kills.  I became such a non-factor that I was more of a support.

The idea behind this game was to have me be the kill potential in a poke comp.  We still had good poke with Morgana, Jayce, Elise, and Sivir, and then I was just a little extra zing to help finish people off.  About eight times this game though I would burst someone down and watch myself not get the kill credit.  I thought it wouldn’t effect me, but I definitely noticed it in my damage output.  Luckily, we had some great damage output from Jayce who was able to execute effectively.

Yup, Gangplank had the summoner name “Sexy”.  It really didn’t seem fair.  Dan made a huge stink about the guy and how his account must have been created in the Dark Ages to get a name like that.  I checked and his lolking number was higher than Dan’s, which means that Dan could have been “Sexy” instead of “SirSpam”.  Sigh.  Imagine us using our IGN’s at work and us all having to call Dan “Sexy”!!  Hahaha!  That would have been great! 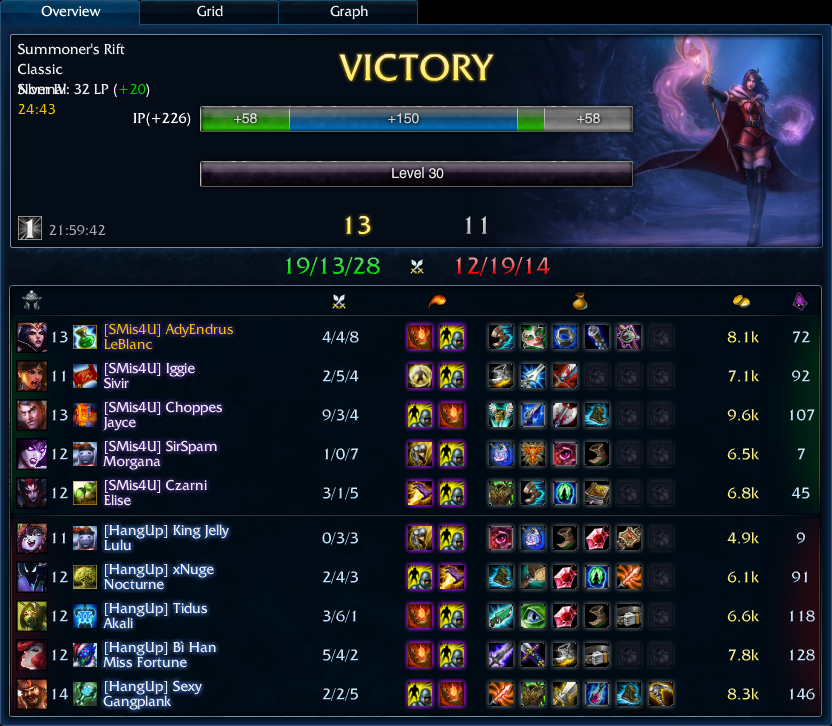