Jungle… is a role that I never play.  When the rest of my team locked, I comically tried to encourage our Kitty Cat Rengar to fill that role.  He went off about feeders and idiots and people who don’t listen or something like that, and so I blocked him out and tried to find someone to jungle with.

Allow me to make a comprehensive list of the people I feel comfortable with in the jungle.  Ok, now that that’s all done, let’s take a look at what happened.

I camped top.  Garen v. Rengar turned out to be in Garen’s favor.  Garen pointed out the fun fact that if you swap the syllables in the name “Garen” you get “ren-Gar”.  HA!

I stacked a lot of armor and was able to disrupt their team.  With the combination of a guaranteed Kayle ult and that Guardian Angel, I was really a mobile stun machine with 32% lifesteal.  End result?  I won by 35 gold.

I had just lost the game for my team in the previous match.  I was camped top by the enemy jungler.  I felt completely helpless.  The only person who was doing well was v1ruz, who was mid as Katarina.  We surrendered right at 20 minutes.  Next game, while in queue I complain and say “Let me take mid so I can at least abuse someone” and my team listens.  They let me take Mordekaiser mid.  Support Zyra with Ezreal in bot lane.  Solo top Renekton, and Shen in the jungle.  I notice that when we have 6 kills the other team has 14, and I have 4 of our 6.  Surrender vote comes, I vote no immediately, but hunterofthetiki asks me “are we surrendering?” and I tell him no.  Vote fails 3-2.  It continues to do so time and time again.  I start to panic because my team is losing all of their lanes.  I order everyone to come mid.  I know we can win a team fight, we just have to get Graves.  The enemy Graves is pretty big by this point, but if we can get him on our team, we can win this game.

Our mid pressure is insane.  My wave-clear by this point is immense, and the last time Blitz hooked me I walked away with a double kill.  And I’m twice as nasty now as I was then.  Blitz is literally looking at my like I’m a tank, he won’t touch me, just tries to look past me.  We get up to their turret and our Renekton takes a bit of poke (I think she got grabbed and then had to dash out, but almost died in the process).  Without any warning v1ruz splits to run top, I’m assuming to farm.  The other team kills Shen, kills Ezzy, then gets Baron for free.  We can’t even contest it.  New game-plan: wait for Baron buff to expire.

We do our best to keep defense up in every lane as the enemy closes down the cushion in every lane.  They are running up bot lane, taking towers and minions, no prisoners.  I ping Graves and say “just commit on Graves.”  I see Empra dash through the enemy team, getting to Graves.  I get the chance to drop a full combo on him, and instantly Graves is fighting on our team.  Our whole team is shocked.  We just stood up to a Baron buffed team, who has a double-digit kill lead on us, and we won the team fight?  What’s happening?

That was the turning point in this game.  By the end of the match we catch them out in their own jungle.  They know that we are there, but they are moving as 5 as well, and thought they would be OK.  I initially thought I started with R on Graves.  However, I must have been CC’d.  He definitely didn’t get ulted.  My health started to drop extremely low.  I unload the rest of my combo on him, see him drop to 1/6, and I’m in a panic.  I need his health to run out before mine does.  Then I realize my R is off cooldown.  I take this fine opportunity to press R on Graves.  He instantly dies, and my health starts to sky rocket.  This Graves tanked their team while I chased after.  I could taste the victory, just around the corner.  Chasing Kat and Blitz into the base, Kat is just a step ahead, and ZING!  Dies to Ezreal ultimate!  Blitz just decides to stick around and see what I’ll do to him.  Standing between the two Nexus turrets I blow up Blitz, then turn to finish off the base.

The Victory tag was surreal.  Chat was spammed with people complaining about what I had just done.  I hope this picture of the score screen captures what I really did. 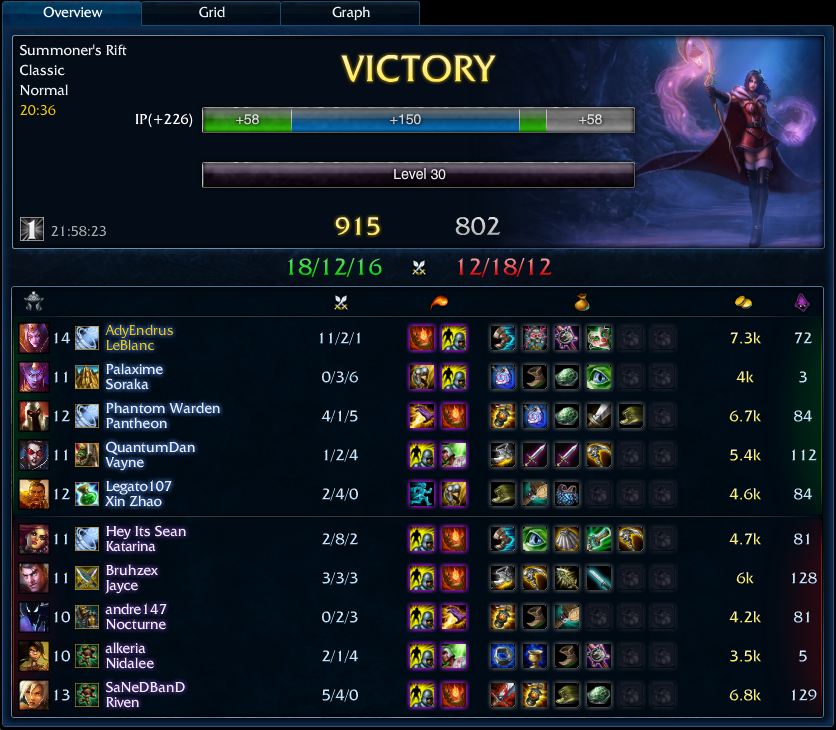 Kat is highly mobile, manaless, and is a generally strong laner.  This was a blind pick game that I went in solo queue, so no bonus jungle pressure or help from people that I know.  Kat showed up in lane after we traded for first blood with a Negatron Cloak.  I felt this was EXTREMELY rude, so I took out my frustration on her.  I was surprised at how effective their Nidalee and Jayce bot lane was.  Managed to hold our bot lane to a combined 1/5, and Riven was having her way with top, putting poor Xin Zhao at a lowly 2/4.  Thanks “team”.

After we were finished playing our Tuesday Night Ranked 5’s we decided to try one more game in the blind pick queue.  We had an interesting team comp, but it was highly effective as a team unit.

Yorick is rated one of the most obnoxious laners in the game.  I already knew that going into this game, and tried to make the most of it.  After we tower dove Yorick to give me my second kill, the tower executed me, leaving me at 2-3.  After we grouped to ace them and then force a baron fight they promptly surrendered, but not before an aged-woman’s voice yelled “Legendary!”