It had been awhile since I had played Teemo, and even longer since I had played AP Teemo, but G wanted to play some games, so I figured why not.  I pressured top early for first blood, but had to blow flash to not trade deaths.  I kept tabs on Jarvan until I was in complete control.  I got a few early kills, and so when I hit level 8, the enemy top was still level 5.  Things spiraled out of control.

The only threat on the other team was really Ezreal.  He was positive, was farming well, and everyone kept commenting on how he was a good Ez.  Ezreal is strong, but Teemo is stronger!  I wandered bot lane when we were zoning for Dragon control and managed to catch Ezreal out.  Deathfire Grasp into an auto and a Q made Ezreal very sad as he disappeared.  Then I could go back to top.  I had established myself as Alpha!

One highlight in this game was Sona stopped moving, our Sivir was attacking her, and when Sivir saw that she must have disconnected Sivir just walked away from a VERY free kill.  It was an honorable moment on the Fields of Justice.

Communication through applications such as Discord nowadays seems indispensable for a gamer, but in the case of communication via telephone should be considered as a predecessor medium and also as or as important as digital media, VoIP vs SIP, you do not know which is better? Render and improve your telephony now

I don’t know how this Ezreal game happened.  I got an early kill which turned into one Doran’s blade.  I ended up having three of them with phage and a vampiric scepter.  I told myself that I’d go back to buy at 2550 to get my Bloodthirster.  At 4250 gold I went back to base.  I can only remember recalling once or twice in this whole game.  I had crazy shopping sprees when I did go back!

I left base with Bloodthirster, Phage, and Zeal.  Next trip back to base I had Trinity Force and double pot.  Next trip back I had Guardian Angel.  After I died with GA I bought Last Whisper.  I felt pretty stacked by that point.  Kha’Zix had a number of kills late, but lost his lane hard.  He was defending at the inhibitor turret, which always makes our jungle fun.  The enemy Rengar lived in top lane, wanted to fight Kha’Zix I guess.

I abused my Trinity Force proc for a triple kill on Ahri, then I was chasing Corki for the quad and RAN OUT OF MANA!  It was super aggravating.  Also, I pegged him with my Q and an auto attack over a wall, bringing him down to less than 100 life.  I couldn’t finish him.  By the time I had mana to E closer he had jumped the wall to his base.  Being the idiot that I am I chased him over the wall to fight a full health Blitz and Ahri.  I may have lost that battle.

It was a fun game, the only disagreement on my team was when Lee wanted to push bot because we had bot inhib.  I told him that bot would push itself and we could take Baron when they went to defend it.  Instead, someone on the other team got caught out, we took that opportunity to just take towers top for free.

So we’re moving through the jungle to top lane and Rengar jumps me.  Now, understand that at this point I’m done getting kills and I’m done dying, so my record of 16-5 stands.  Rengar was probably 1-11 at that point.  I burst him down to just above 100 hit points, but knowing that he used his ult to get to me, I know he doesn’t have it up.  So instead of killing him I just walk around with him.  Me, Soraka, Lux, and Rengar, hanging out in the enemy jungle.  I wanted Soraka to get the kill, but her Q’s were doing so little damage to him that he could have used life steal to sustain off me while she tried.  Lux eventually ended his spawn with a Q and we continued on our merry way.  Lux and Soraka were sitting in the same room and told me how hard they were laughing at that while it happened.  It was quite a gem.  Then the enemy Nexus blew up. 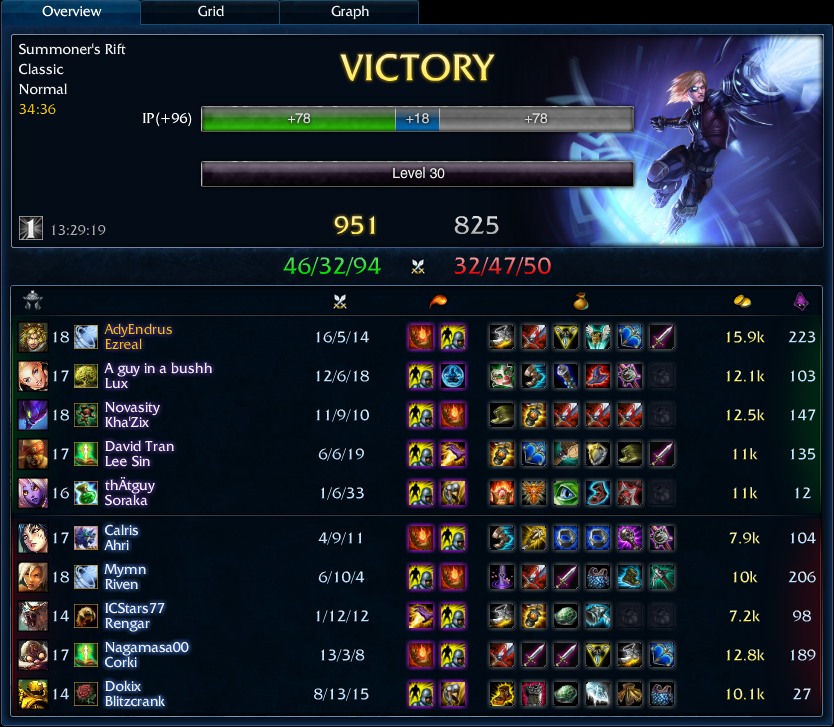 Graves isn’t new, I’m new to Graves.  I unlocked him the day I played this game, so 9/25/2012.  However, I have multiple ranked wins with Graves.  He used to be my favorite AD carry.  I loved harassing with his Q, dodging with E, and shutting down strategy with his W.  The burst from Q and R are scary enough to win trades bot lane.  His E lets him abuse lanes and has almost no cooldown with a friendly jungle Nunu and Phantom Dancer.  This happened to be extremely convient, because I had both!

We dominated bot lane by baiting both of Trist’s summoners.  Once she didn’t have ignite or heal, we knew she wouldn’t have flash.  It was nubehound’s first time on Taric, but he did a great job knowing when to stun and when to run.  Tying for fewest deaths in your first game as a champion is pretty admirable.  Also, I told him to max W first, and I don’t think the enemy Taric followed suit.  This gave us a huge armor advantage in the bot lane, combining Grave’s passive with Taric’s passive made us a bursty, tanky bot lane combo.  Tristana’s magic damage from her E was still quite effective without extra MR, but I knew that if things got ugly and she jumped, used E, and ignited me, that I could just flash away and it would be k.  After I was 7-1 we decided to wander to mid lane to find other stuff to kill.

The other team’s top and mid were doing very well.  We were in a stand-off mid, and were afraid of getting poked down by Syndra and Cho.  I had just gone back to finish my Phantom Dancer and said “I wish we could get to that Syndra.”  Nubehound, not understanding the dangers of a fed mid, said, “Here, she’s stunned” and proceeded to stop forward and just dropped a stun on Syndra.  I unloaded everything.  I’m assuming my team did the same.  Syndra melted and was nothing but a greasy spot on the road.  A team fight broke out where we aced in exchange for our Cho’Gath (if I remember correctly).  It seemed like a fair trade.  We shoved so hard mid that the game was basically over.  The enemy team just stuck around to let me get my Guardian Angel, then they gave up. 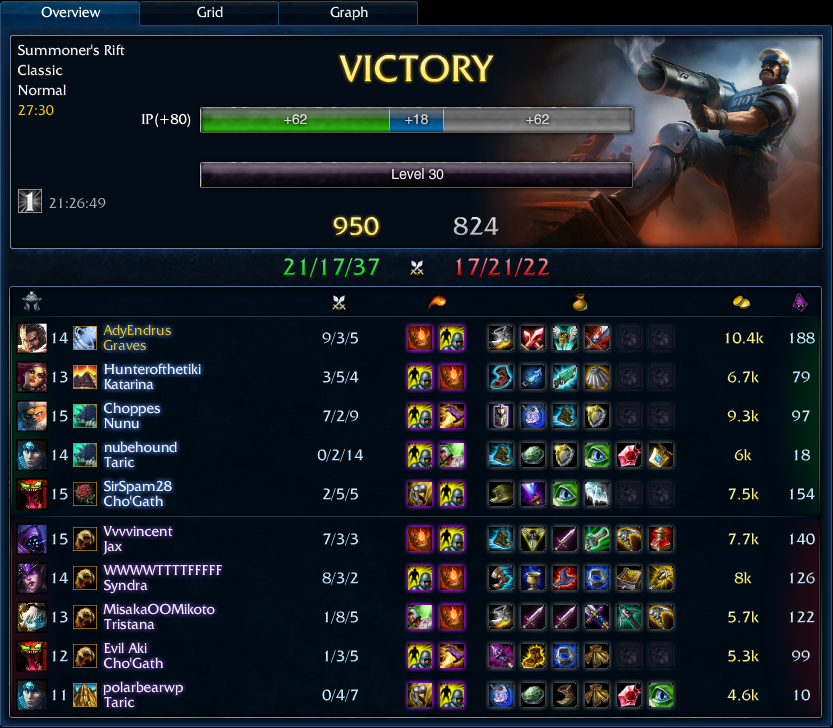 We had put together a five man team and had played quite a bit together.  We re-united to play a blind pick normal, and I offered to play LeBlanc mid.  By “offered” I mean I said I was playing LeBlanc and I locked in.  I mentioned to someone on my friend’s list that I was going Soul Stealer LeBlanc, so this game was going to get very interesting.

Swain was mid.  Now Swain is actually a good counter to LeBlanc.  His ability to heal himself up in lane before my burst is something I was afraid of.  Also, the base damage on his three abilities could be devastating for a squishy like LeBlanc.  He was also using a custom skin, so his root looked different, something that caught me off-guard at level 2.  Well, caught me off for a second while I was rooted, then I first-blooded Swain.  If LeBlanc gets within melee range at level 2 and ignites you, it’s probably best to get under your turret as quickly as possible.

When Shyvana showed up to avenge the poor first-blood Swain, Dan actually warned me over Skype and I said, “Oh look!  Second blood!”  I didn’t get the kill on Shyvana, but I did get my Soul Stealer and about 10 stacks before the game ended.

By the end of the game I was checking with tab to see which players on the other team were still worth gold.  0-X Shyvana, 0-X Nunu, I needed to kill Kog or Swain.  I felt like I had killed Swain enough, but you can never kill Kog enough, right?  My first trip bot was actually a double kill, but mostly thanks to Iggie.  Kog and Nunu were just going to walk away from me if it wasn’t for a well-timed Sivir ultimate.  I even told them “They’re gonna get away from us!” and Sivir popped ulti and let me close the gap.  Three spells on Kog and two on Nunu sealed the deal. 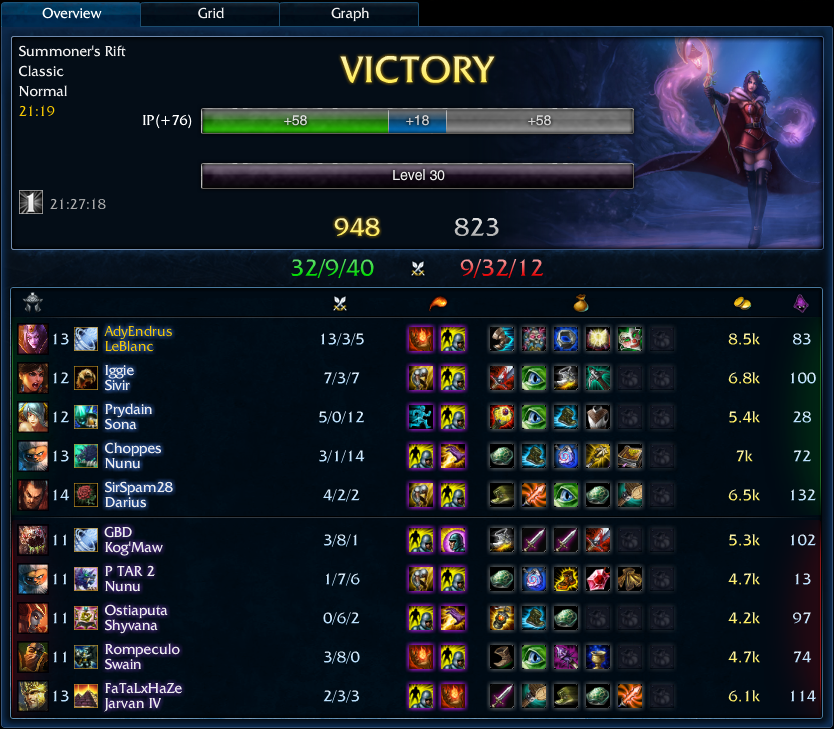 Sometimes I really suck at this game.  The picture below shows some evidence of that.  The mistake that I made was one that I’ve seen becoming more and more prevalent among Ezreal players; I thought that because I was Ezreal and had a couple kills in bottom lane that I was king.  It turns out that if you forget to farm your items you don’t do any damage.

I was down to 5 kills and 6 deaths, a negative record, but I was getting behind on farm, so I dropped the chasing, the team fighting, the scouting and went to work.  I shoved top until I had 5 people from the other team coming after me.  Then I ran bottom and did the same.  I took a tower, then continued to shove and the whole other team showed up to fight.  I would just kite and run.  I’m Ezreal, I have two blinks and Trinity Force.  If I can just get out of the Ashe permaslow I’ll be fine.

Once I had items the whole game changed.  I had enough lifesteal to fight the fed Riven from top lane.  Luckily, I also had enough mobility to keep her from getting away.  I fought my way back into this game and it felt great.  I can’t blame Forrest because he was rusty and Riven is a joke.  I’m just glad that we turned it around and won it.  The enemy team actually surrendered but not before my old lady-friend yelled “Legendary!” 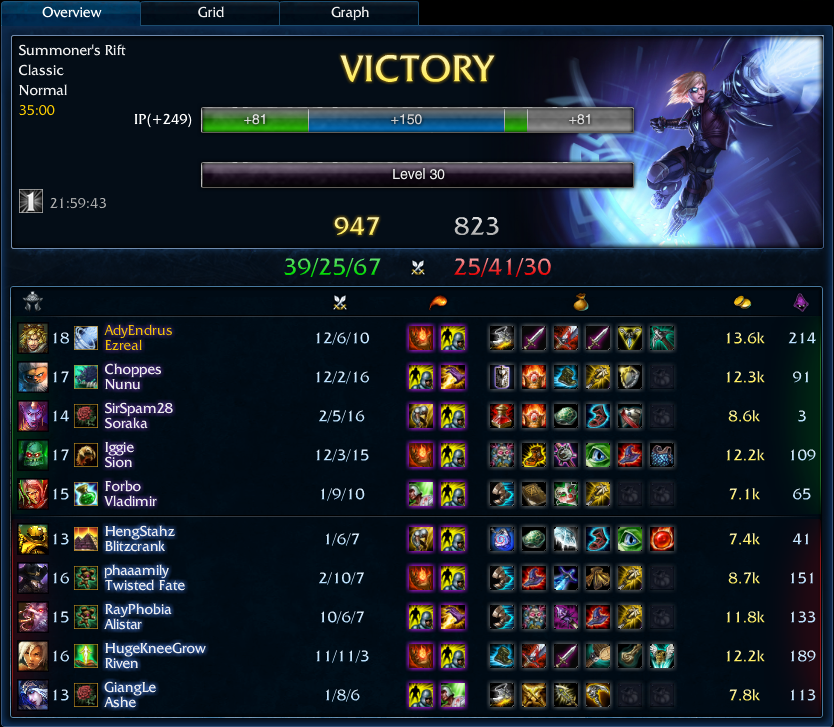