I was worlds away from having most gold on my team, but I was still a contributing factor thanks to the stacks from my trusty Soul Stealer!  I always doubt myself when I buy that item.  It does set me back quite a bit of money, that I have to make up somewhere else.

800 gold is the equivalent of 40 Ability Power.  That means I need to break five stacks to make it even.  Two kills and an assist just to not be upside down on a purchase in a video game!  That’s a lot of work!

Laning against Kha’Zix was not an enjoyable experience.  Despite harassing him early, taking his Flash, and beating him in CS, he was still able to pressure mid successfully.  His Void Spikes just out-ranged any of my abilities and moved so quickly that I couldn’t dodge them effectively.  I normally stand up far enough to zone the enemy mid player, but against Kha’Zix I didn’t feel like I could stand up far enough because I would take damage from his spikes for free.

The one time I did flirt with death was when I knew Olaf was waiting in the wings.  I stepped ahead of my creep wave and ate a full Kha’Zix spike right in the face.  It dropped me critically low.  Let me walk you through it.

In this first picture Kha’Zix’ spikes had just dropped me to 187 HP, but he was mid-jump ready to end me. 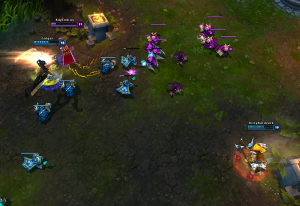 Luckily for me my Distortion was available, so I flew over the wall to safety with plenty of hit points left!  All 47 of them! 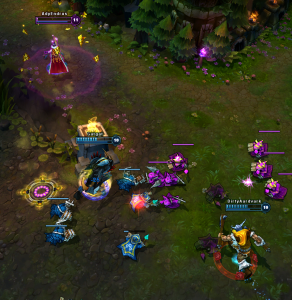 With two people chasing me I saw the perfect opportunity to bounce back to my friendly Nautilus who had made his way to mid lane. 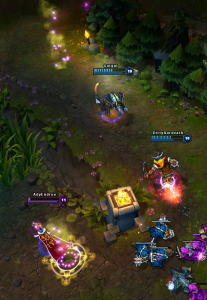 The enemy team saw that I would be trapped if they circled around me, so that’s just what they did.  Olaf doubled back down through lane and Kha’Zix circled around above me, but not before sending me a lovely parting gift of SPIKES! 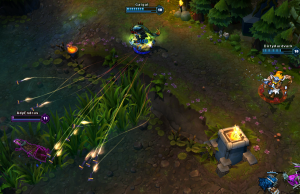 I figured that since I had only regenerated to 55 HP it may be wise to avoid those spikes or suffer the consequences.  With those narrowly missing me I walked back to the edge of that bush in safety and waited for the enemy to close in. 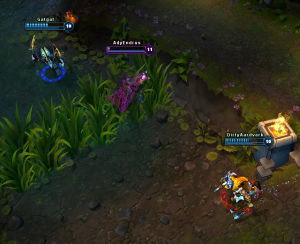 Seeing them this close I knew my time was now.  I couldn’t afford to have Kha’Zix hit me with one auto attack, ability, or summoner spell; my time was now.  If Olaf had time to land a Wreckless Swing or Undertow then I knew I would be dead.  It’s time to Mimic my Distortion to blink over the wall. 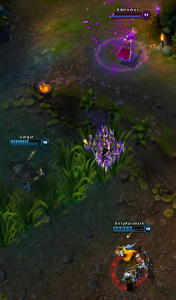 It was seconds after this escape that Kha’Zix showed his sportsmanship and wrote “really well done lb” which made me smile.  The casters could appreciate some clever juking skills as well!

For my next trick, I’ll make their life bar disappear.  At the time of that juke I was merely 1-0-0.  By the time I got around to juking again I was 5-1-7 and sitting on 11 Soul Stealer stacks, which rounded me out to 728 Ability Power.

I made the mistake of seeing their red buff up and thinking “Oh goody! We’re going to get this for free!”  However, I walked right through a ward to get to my current location so Raytheon knew exactly where I was. 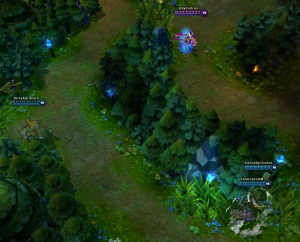 I had no idea anything was going wrong.  However, when the support is willing to run at a LeBlanc with 728 Ability Power you start to think you’re in trouble.  Here’s a glimpse at what I saw that set me into a panic. 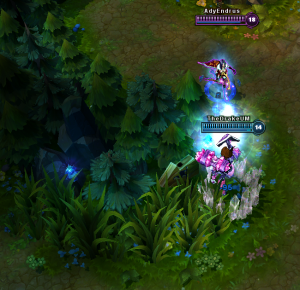 That Dazzle mid-air means anything but harmless.  For a champion as squishy as myself it means to make like Tom and cruise.  Here is what my spidy sense were tingling about: 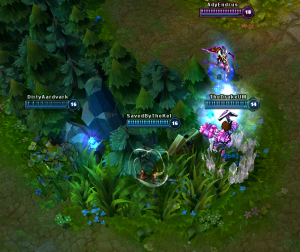 I knew I was in trouble so I did what any person would do in a panic, I used Distortion to separate myself from the serious pain I was experiencing. 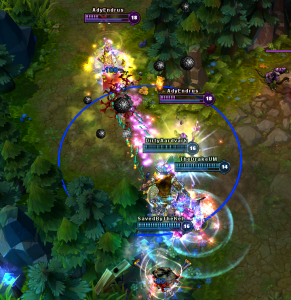 Even at this distance I was still eating auto attacks from Miss Fortune and at serious risk to eat one Undertow from Olaf and get slowed into my death.  I needed more room.  So I Mimicked Distortion to push myself further. 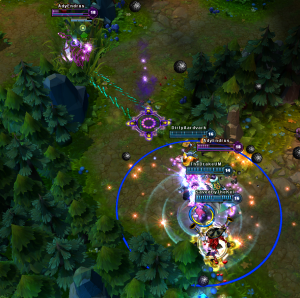 Then the realization set in that this was warded.  Of course it was, that’s how they knew I was coming in the first place.  I needed to disappear.  I needed somewhere to go to escape.  Turning left honestly seemed like the best option in the moment.  If only there was somewhere else I could go. 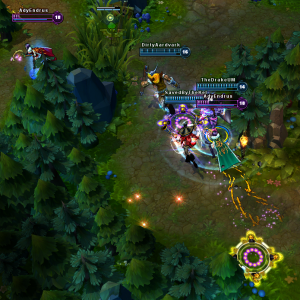 A picture like this is a priceless gift to a LeBlanc player; when you see that they have committed to chasing you the direction that you double blinked.  Thank you, Riot, for changing LeBlanc to allow plays like this.  While my champion stepped left, possibly into the fog of war, I blinked back to that beautiful yellow spot on the ground. 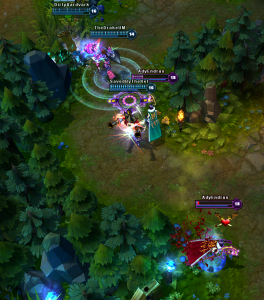 Miss Fortune actually auto-attacked me on accident after I snapped back, dropping me to 56 life.  Out of shock I obligatorily used Flash to widen the gap between her and myself.  It was in vain as after auto-attacking me once she began to channel her ultimate exactly where I would have been if I hadn’t blinked back to my original point. 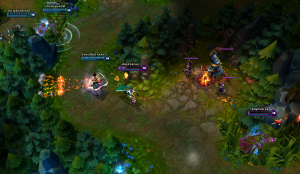 I quietly slipped out to the river and recalled with the safety of my team members creating a meat shield around me.  Thanks, meat shield! 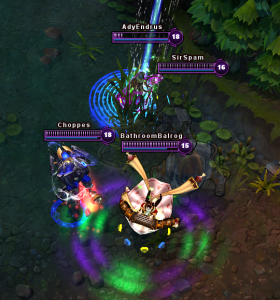 At the end of this game Caitlyn and I were recovering from this battle of epic proportions.  We were walking down mid while the other three members of my team were in bottom lane.  I could see super minions flooding in from top and mid where we had already taken the inhibitors.  I made the call; force a fight with the enemy team to hopefully bait Shen out and we would take their base.

Caitlyn and I were walking up the stairs into the blue base, and Nautilus threw down his ultimate to get the attention of the enemy team.  Each member was tied down with some form of crowd control, preventing them from retreating back to help their poor ally, Shen, who fell almost instantly to the burst of LeBlanc and critical strikes of Caitlyn.  With Shen down we quickly took the Nexus turrets and stepped back to prepare for the battle that was surely going to follow.

I fell dangerously low, and had to step back and out, allowing my clone to scout and bait for me.  In the meantime, Caitlyn actually fought Miss Fortune one on one and beat her, eating through her health, forcing her Guardian Angel to save Miss Fortune, and then continued to battle her.  At the last minute Nautilus swooped in to assist with that kill.

Luckily, Olaf, being a good guy, walked back into Caitlyn at the very last second to let her finish him off to improve her score slightly and make the score screen that much prettier.  It was a battle well-fought, but SecurityMetrics prevailed in the end. 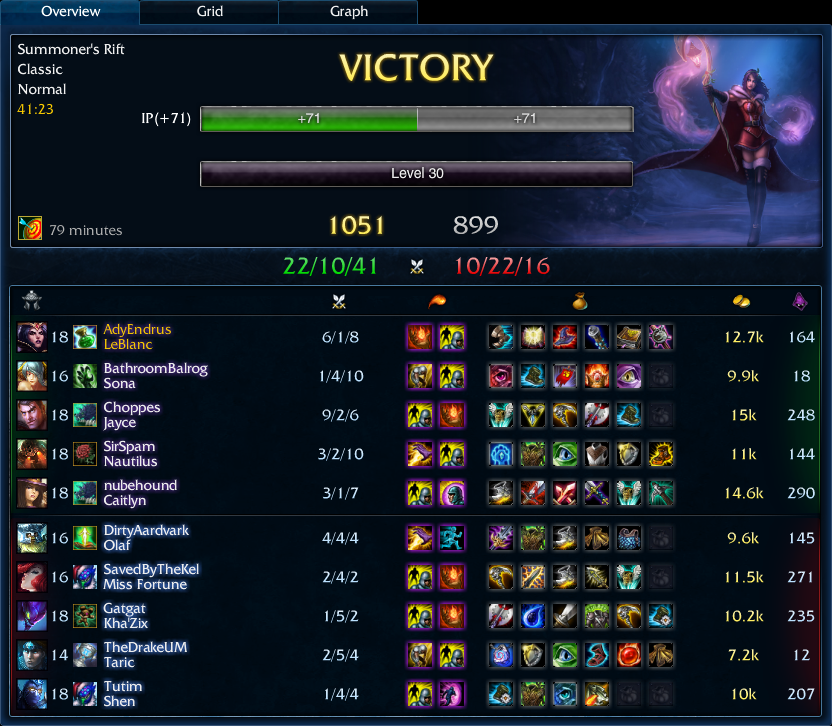